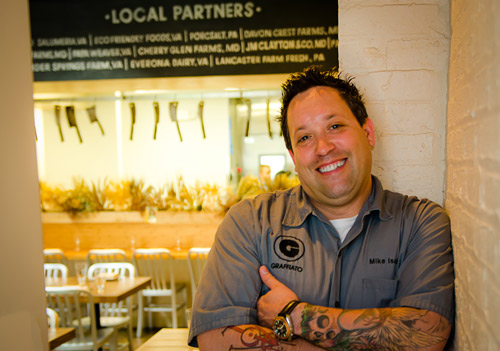 Mike Isabella is everywhere these days. Wearing his signature gray gasoline station shirt with Graffiato's logo at the top right breast of the shirt, he goes in and out of his two restaurants that are located in the opposite side of town from each other. Bandolero, the Mexican-inspired eatery in Georgetown that just opened a few months ago, has been his main focus.

Then there's Graffiato. "My baby" is the term he endearingly calls the New Jersey-Italian-inspired, small plates eatery in Chinatown. The first restaurant under the Isabella culinary empire reached its first year last week, and he couldn't be more proud. When Eater recently met up with him, he looked tired. After all, he just finished writing a book and laying the groundwork for two more restaurants in 2013. But ask him about his projects, his two scooters and, especially, Graffiato, he lights up.

Happy Anniversary to Graffiato! How do you feel?
I'm excited. I always look at the big picture. My goal is to keep rolling. Keep it going and keep it getting better. It's been a phenomenal one year. Where we are now, it's just a ball of joy.

So you were nominated for New Restaurant of the Year at the Rammys. It went to Fiola, but how do you feel about being nominated?
It's cool to be nominated. I'm the new guy in the scene, in a certain way, with my own company. I always enjoy being in the same category as James-Beard winning chefs like Fabio [Trabocchi from Fiola]. He has a restaurant, a great name and great food. I didn't even think I was going to win to begin with. I was just happy to be a part of it. I don't worry about that stuff. I just try to do what I do best.

You were also selected Food & Wine Magazine's "People's Best New Chef" [in the Mid-Atlantic area]. How did you feel winning in that category?
That was huge. That was a monstrous accomplishment for me, especially with the fan base I have, the people who believe me in, all the people that ate at Graffiato and watched me cook on TV. So for me to win that was cool. There's also big Top Chefs in there. Mike Voltaggio was competing in L.A. and he didn't win. I was very surprised about that because he's got a restaurant. He's a great chef and he also won Top Chef.

What did you do to celebrate [when you won that award]?
Not much. I don't really have a lot of time to sit back and go out. I just kind of keep working and doing what I do.

For Graffiato, you chose Chinatown. Why?
I worked at Zaytinya. I know the area very well. I think it has a good lunch business, a great dinner business. You're by the convention. You're by the Verizon Center. From a business standpoint, to be successful in life, I really think, no matter who you are, you need to have a good location. I think Chinatown has one of the best locations in the city.

When Graffiato turned one last week, what did you do?
We just offered complimentary prosecco to all the diners. We brought the sweet corn agnolotti, which is a top favorite dish. But we also brought back the gnocchi. Then we're going to bring back the chicken and pepperoni sauce. That was the number seller for awhile. My chefs for awhile would cringe because everyone would order it. So all night long, it was cooking, cooking, cooking chicken.

I read that one of the hiccups you had was the signage in Chinese. Other than that what were other hiccups in the first few months of Graffiato?
It feels like a lifetime ago. It's been a crazy year! Opening up a restaurant is tough. Permits, signage, front door issues, plumbing issues. There was one day. It was Sunday. The line was out of the door. We didn't have any spaghetti. When we opened the doors, we didn't get to [the spaghetti] because we had so many things to do. There were other chefs in the restaurant; they expedited and started rolling pasta. It was mayhem when we opened up.

I've also read that you're always going to be involved with Graffiato, especially since it's your first restaurant. But you just opened up this and opening up two more. How much are you going to be involved with Graffiato?
Fortunately and unfortunately, I work seven days a week. It's a lot for me. I'm not in the line as much, but in and out every day. I obviously spend a lot of time here because it's newer. It's going to be hard, but I do have my scooter. I drive back and forth. Sometimes, I'm here twice a day and at Graffiato twice a day. So I'll always try to show my face. I'm hands on with everything...and I have a lot of trust in my team.

I noticed you got on your scooter while I was at Graffiato earlier today. I'm sure you go back and forth a lot. Has it been to the repair shop several times now?
I have two scooters. Funny story. Yesterday someone called me up to come here. So I hop on my scooter. I'm driving half way here and my scooter stalls. I couldn't get it started. So I pulled over, called my wife to pick me up. It was in the middle of rush hour. She picks me up, takes me home, I hop on to my other scooter and drive here.

So you got two scooters specifically for this reason?
Yes, for that reason.

I also noticed that you wear your gray Graffiato shirt everywhere...
Yup. I went to lunch today at The Source. This is what I wore. I went to the W [Hotel] the other night. I wore this. But they're kind of cool. They're gas station type of jackets. I don't have time to go home. And when I go out, I do what I do. When you're walking with a white chef's coat, people are like, 'Oh.' But when you're walking around with this, [people] don't realize you're a chef.

So how many shirts like that do you own?
I've got 15 of them.

What are the next steps for Graffiato?
Graffiato is in a great situation right now. Things are going so well. I'm so excited because maybe one day we'll see more Graffiatos around the country.

So are you going to slow down?
I don't know. I don't think I will slow down. My goal in life was to be a restaurateur, a chef-teur. I've helped opened up a ton restaurants and hotels. That's what drives me. I love it. And I'm going to continue doing it. And I threw a book in the middle of it, [which is] coming up in the fall. I'd like to write another book. So keep doing what I keep doing.