The Early Word on the Sizzling NY Avenue Beach Bar

Share All sharing options for: The Early Word on the Sizzling NY Avenue Beach Bar

The New York Avenue Beach Bar opened just in time for Memorial Day weekend, bringing the beach to all those Washingtonians who couldn't make it out to the actual beach. Now that it's had more than a week and two full weekends to make an impression with its Ocean City-imported sand, beach balls and frozen drinks, it's time to take a look at what some of the early beachgoers saying about the New York Avenue Beach Bar.

The Good News: French Twist DC has logged several visits to the beach bar since it opened and concludes: "So far, the New York Avenue Beach Bar seems to be a resounding success with the left-behind in the city on Memorial day weekend crowd. I've already been twice in the two days that it's been opened (don't judge me) though I've never stayed very long... the bathroom situation (porta potties basically) is a bit of a problem I think but then again, since the drinks are kinda pricey I don't anticipate having to use the restrooms too much..." [French Twist DC]

The Good and Bad News: Brightest Young Things stopped in for an early look and shares thoughts both pro and con: "The good news is: the place is big, the drinks are frozen (something one can truly appreciate in the swamp that we live in) and no one takes themselves too seriously. ... The potentially bad news are: this thing is going to be packed 24/7, there is no signs of a happy hour of any sort (mixed drinks are $10),  the sand is going to get inevitably mucky and there were some light credit card phone line issues." [BYT]

The Great Sundevich Truck News: One Yelper has filed a review exclusively for the Sundevich truck: "The BBQ Pulled Pork was loaded with meat, but the Chorizo link -- with a burst of added flavor from the chimichurri sauce -- stole my heart.  For just $5 each, and with a condiment bar well stocked with different mustards and hot peppers to customize your meal, these sandwiches are not to miss." [Yelp]

The Booze News: A Don Rockwellian lays out the deal when it comes to booze: "As of now, beer consists of cans of Miller Lite (no the punch hole is NOT AS EASY as the commercials say!), Modelo Especial, and Heineken. $5 for the first two, $6 for the latter. There is a slushee stand with "Orange Crush" and strawberry margaritas. $10. There is also a stand that was selling various rums and vodkas with a mixer for $9. I had a Hawaiian rum with tonic, it tasted like cream soda. Bring cash, and your life will be much easier." [Don Rockwell]

The Bar Critic News: Fritz Hahn of the Going Out Gurus tweeted the following during a recent visit: "The frozen margaritas at @NYAveBeachBar have enough tequila to put most other bars to shame." [Twitter]

The Bad News: Here's a one-star review from Yelp: "Let's be honest here: you are located in an alley. Yes, an alley. An alley with loads of sand dumped into it nonetheless. Talk about random as hell. It's not even an alley in an awesome location, it's in that desolate open area next to the convention center (but not in the complex of the Safeway and overpriced condos). I will agree with what another reviewer said, I think the idea was really great but the execution was just terrible. I just can't get over the randomness of it. I think it definitely would have been better if it was at least on a rooftop. And where the hell is the water? How can you have a beach with no water? They could have at least had a kiddie pool or something." [Yelp]

The In Defense of NYABB News: In response to some one-star reviews, one Yelper leaps to the beach bar's defense: "Look, this place admittedly has a few problems. $5 is too much for a can of Modelo, $10 is too much for an 8 oz margarita, there aren't enough seating options, and the lines at the bars get so serpentine that they spill into the general crowd making it difficult to find where they start. These things can be fixed though, and over the next several weeks I'm sure they will be. NYABB is a fun place and truly the only one of its kind in the city." [Yelp]

The Good Advice News: Someone over at Foursquare leaves a really important tip: "Bring a helmet. Lots of flying beach balls." [Foursquare]

The Great Neighbor News: The folks over at the Columbia Room — which does share an owner with the beach bar — approve of their latest competitor. In drawing form, per Katie Nelson: "CR 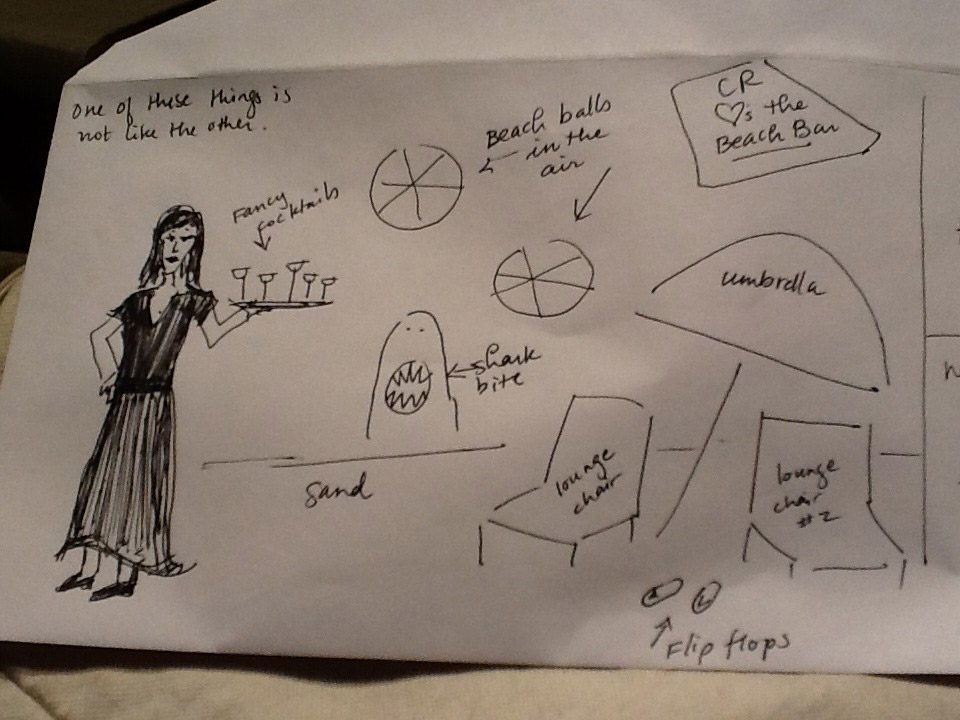