Jersey Mike's, Paladar Latin Kitchen, and More on the Way

Share All sharing options for: Jersey Mike's, Paladar Latin Kitchen, and More on the Way 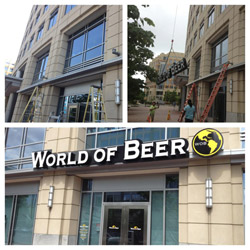 1) Everywhere: The Post's Capital Business section reports that Jersey Mike's is poised to invade the DC area with 15 new stores by the end of this year and 140 locations in the DC-Baltimore area in the next seven years. There are a couple in the works for Maryland already. [PRE-PLYWOOD]

2) Ballston: Signage went up over the forthcoming World of Beer just before Memorial Day, and the bar with 500 bottles and 50 drafts of beer has announced that it's still on track to open in July. [PLYWOOD]

3) Bethesda: The Washington Business Journal has it that the Cleveland-based Paladar Latin Kitchen & Rum Bar is moving into the North Bethesda Market with 50 types of rum and Caribbean-influenced dishes. There's also going to be a Jimmy John's. [PRE-PLYWOOD]

4) Virginia: The froyo binge continues. Citybizlist reports that Menchies Frozen Yogurt has signed leases both at Alexandria's Pinecrest Plaza and Arlington's Penrose Square, expected to open in the fall. Beyond that, there are another six locations planned for the DC area. [PRE-PLYWOOD]

5) Columbia Heights: Prince of Petworth checks in on El Chucho's, which has now moved its target opening date back to June 17. He also has some nice shots of the interior and the roof deck. [PLYWOOD]