After Lincoln and Teddy, Alan Popovsky Might Open JFK and Jefferson-Themed Restaurants

Share All sharing options for: After Lincoln and Teddy, Alan Popovsky Might Open JFK and Jefferson-Themed Restaurants 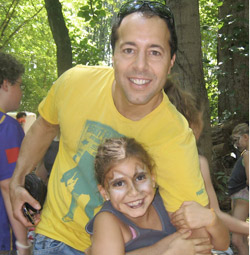 The news that Lincoln owner Alan Popovsky has plans to open Teddy & the Bully Bar and a whole string of presidentially themed restaurants was really just asking for speculation as to which presidents would get the treatment. Eater commenters jumped right on it with the Richard Nixon Cottage Cheese-o-Rama, Zombie Reagan's and the JFK Gentleman's Club — and, look, HuffPo has a slideshow of suggestions.

Now Popovsky tells Eater that he's definitely planning a JFK concept, and strongly hints to Thomas Jefferson based upon some basic Mount Rushmore process-of-elimination skills. These would be in either DC or Philadelphia and the plan is to open a presidential restaurant every two years or so. Ahead, the restaurateur talks a little about the research that he's pouring into these historical projects, why he's selecting these presidents in particular and how his other restaurant Hudson started it all.

What do you envision for future concepts?
Besides Lincoln and obviously now Teddy we do have two other presidential concepts that we will be rolling out either in Washington, DC, or right now we're talking to someone in Philadelphia. That's where my family is from, so I want to at some point go back and do something there. Whether it's a Lincoln or the new concept besides Teddy that we have — and I don't want to divulge it — is a modern-day president. When I say that, I mean within the last 40 years. A mod theme. So you probably can figure it out. It was tough to decide either Teddy or this other theme and we decided Teddy because he was in office longer and he was a really incredible leader. So was this other person, but he really didn't have the chance to become the full leader that he could have been. You know who it is now.

So JFK.
(laughs) We hope to have another concept, another presidential concept. We're picking the right one to the right location. People really want to know history. They want to know more about history because not enough history is taught in school any longer. It's more about concept learning. And I know that because my daughter is in school. They'll teach you about a leader, but not in depth details about what the leader accomplished. They'll only teach you about the leader and how he or she relates to power and etcetera. We felt this was a good way to really not only provide a new, interesting kind of concept, but to bring history into dining. Which has been working really well.

Are there any hints you can give on the other concept you have in mind?
Beyond JFK? Yes. We do have a concept wrapped around another forefather of the country. One of the guys on Mount Rushmore. We're not trying to fill Mount Rushmore. Everyone does stuff on Washington. Not as many people do things on another leader that is kind of a peculiar person, but still nonetheless a father of the country and very interesting. We're pursuing that as well.

Pretty much every president has something interesting about them. That's why they became president. But it seems like the historical presidents were a little bit more... there's a lot to put your arms around as opposed to more modern-day presidents that get really involved in the politics and the special interests. Even though there weren't nearly as many special interests when Roosevelt was president as there is now. So it really bogs down the presidency more. It's not as sexy a job as it was back in the day. I think Obama has done a good job of bringing it back around into the pop culture setting.

Is there anything you're looking for in picking presidents — or things to avoid to stay out of the politics of it all?
We're always looking to stay out of the politics. Lincoln was as bipartisan as you can get, as far as my history knowledge is concerned. As was Roosevelt. Roosevelt today would probably be a Democrat. He was a big business buster. He really was about the common man. We're going to do a Square Deal lunch where for X amount of dollars you can come in and get a three-course lunch. And we're going to change the prices each day representing the years he was president. So on Monday it'll be $19.00 and on Tuesday it'll be $19.01 and so on. We're going to weave as much as we can about the individual into everything we do with the restaurant.

Dishes and menu planning, will that be based off of things that the president liked and things that were common at the time?
Absolutely. As a matter of fact, we had a design meeting today and Maggie [O'Neill] is going to use a lot of historical pieces and really get into the history of what Teddy was all about, even that much more than Lincoln. She's growing too with it. The first restaurant, Lincoln, she did such a wonderful job with that, but now she's a little bit more cerebral and really wanted to get what Roosevelt was all about.

People don't know as much about Roosevelt as they did about Lincoln. He's not completely the iconic figure that Lincoln is, no doubt. But, to be honest with you, he's much more intriguing than Lincoln. Much more rounded than Lincoln as far as his taste for food, for wine. He traveled the world. Lincoln never got out of the United States. Education-wise, Lincoln only had several years of formal education. Roosevelt graduated from Harvard. It's a completely different person. I think that you're going to see that in how Maggie puts that across in the design and how we take it through with the food and every aspect.

Sounds like you've done a lot of research. How do you go about researching these restaurants?
Believe it or not, I was a political science major in college in Philadelphia and that led me to move down here. I just have such a great interest for the government and particularly presidents have always fascinated me. Henry Hudson was this explorer and founded New Amsterdam, which is now New York, and that was kind of like where we were going with Hudson. It's kind of like an evolution for us. So we took that and we did as much as we could with that. And we got into Lincoln and now we're moving forward with Teddy. It's really nice to learn about these different important figures in our history.

It's going to be fun. Every step of the way is fun too. We're still nine months away from opening. The reason we came out with it now was because it's an election year and we want to get people excited about something besides who's going to be the next president. (laughs)

What's the timing for your future restaurants? Are you trying to stick to election cycles or every year or so?
I think our goal to build the company is one restaurant every two years. To have it open within two years of one another. But we like to go pragmatically and carefully. We're not just in the game to open a bunch of restaurants and none of them are properly operated. The most important thing to us is longevity and you don't do that by opening too many restaurants at one time. So we're very sensitive to that and we have no egos here. If we're off on our two-year cycle, we'll be fine with that.