Share All sharing options for: Ewok Alert at a Georgetown Mansion; Glover Park's Affordable Rentals; An $18M House For Sale

All the latest nabe and real estate news from Curbed DC... 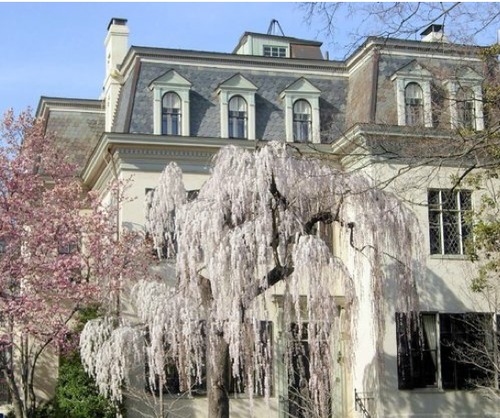 A ten million dollar house on P Street with a possible Ewok statue guarding the pool.

P STREET—A pricey manse in Georgetown had a little fun with the life-size statues guarding the backyard pool. Several frogs and what looks like an Ewok character surround the pool's edge. The rest of the house is pretty nice too.

GEORGETOWN—This week brought the news that there's a new most expensive house for sale. At $18M, this one is very close to Evermay (which sold last year for $22M).

SILVER SPRING—A week ago someone had a piece of yard art—a ten-foot long cigarette made from a telephone pole—stolen from their front yard. The cigarette has been found chopped into several pieces with no knowledge of the culprits.

CHINA—The DC developer Lessard has scored a major project in China which will bring millions of square feet of ultra-modern office space to Nanjing. The fly-by video rendering is over on Curbed.

BEHIND THE SCENES—A Curbed writer spent a recent Saturday shadowing two real estate agents that specialize in first-time homebuyers and found out, amongst other things, "Buying a house is a process of elimination, not a process of selection."

NATS PARK—Murmurings about a new residential/retail complex for the area near Nats Park now have pictorial proof in the form of renderings.

BRIGHTWOOD—This is quite possibly the cheapest condo in DC that is not in your typical rat-infested condition. The problems are mostly cosmetic so an entry-level flipper could make some magic happen.

GLOVER PARK—In keeping with our weekly tradition we focused on one neighborhood and looked at the least expensive properties one day and then found some rentals under $1,500 the next.

RACKED—This week's fashion post includes the details on Ashley Biden's wedding gown, the news that DSW and Nordstrom Rack are coming to former Borders locations, and a class action suit against Jos. A. Banks because they are always having a sale.

HAYMARKET—There's a be-columned bank-owned property that looks an awful lot like the White House which has finally found a buyer for about three hundred thousand less than the bank wanted.