Share All sharing options for: Maitre d' Adnane Kebaier on Accepting Cash and Avoiding Segregating the Dining Room at Marcel's 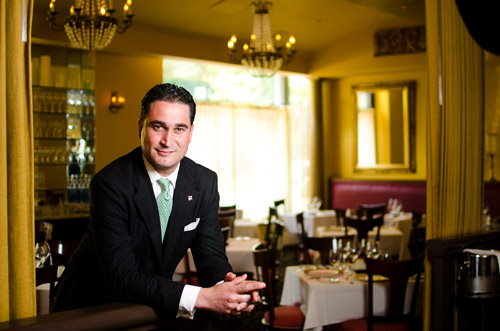 Maitre d' Adnane Kebaier has been with Marcel's since Robert Wiedmaier's acclaimed French-Belgian restaurant threw open its doors in 1999, meaning he's seen a lot happen in the past 13 years. Beyond playing a role in hundreds of marriage proposals, Kebaier has developed a few strategies in keeping the front of the house running smoothly. In this month's edition of The Gatekeepers, he explains why he accepts cash from would-be diners desperate for a table and how race can be a factor in seating guests.

Is there anything I could say or do to make my wait shorter?
If they're really polite and a regular and they're wearing good things, depends on the way they present themselves. Some people they walk in and they lie, they say they have reservations. A lot of times it happens, Fridays and Saturdays when everybody is sold out and they can't get in anywhere, they put on nice clothes and they go out and they say, "We have a reservation. It's your mistake. We called and we made a reservation." And we have to deal with it.

How do you deal with it?
Well, I usually act like they have one. Mistakes can happen. Maybe someone answered the phone and didn't put them or someone canceled the reservation by mistake. So I have to deal with it. What's my strategy Friday and Saturday night when we're sold out? Always a few seats for VIPs left. Always I have Plan A and Plan B.

Has anyone ever tried to slip you money or give you gifts?
Oh yeah. Of course.

Does that ever work?
It works all of the time. I'll make it happen.

Oh yeah? So you accept the money or gifts?
Yeah, of course. You can't turn those away. That's your job. That's how you get paid sometimes, with tips. I learned something a long time ago [from] one bartender who's my friend. He gave me some money as a tip and I turned away the money. I said, "No, don't worry about it. I'll just help you." And he said, "Listen, if your father comes to your bar and orders a beer and tips you, take the money."

So if the restaurant's booked but somebody comes up and gives you money and asks for your help to get in earlier, what do you do? How do you make that happen for them?
As I said, I always have a few seats available for last-minute VIPs, so I take one of those seats and I give it to them. Usually, Friday and Saturday, almost every day when I look at the book, I have my plan. I brief my staff what's going to happen and who's who on which table, whose anniversary, whose birthday, who is gluten-free, stuff like that. So when that happens, I have to brief my guys again and change the plan, changing tables, everything. It's very hard for me to keep the balance in the dining room.

How so?
Just look at the dining room. For example, you cannot have two African-American next to each other. Or two Chinese or Japanese next to each other. It kind of looks like a different section just for this race. I have to split them around and it depends. If someone for example wears a nice suit with a nice watch, nice lady, I'm not going to sit with him a guy wearing just a khaki and a shirt. You have to have the balance in the dining room.

Have you ever had people accusing you or the restaurant of seating people of a race into the same section?
Not really, no. People sometimes complain. For example, they go online. The reservation online, there is no note, nothing. On a Saturday night for example, they walked in, "Oh, it's our anniversary and I want a big table and I want to sit in a banquette and a chair. We want two chairs." Well, you have to wait at least one hour at the bar until you find another table with two chairs. In that case they complain.

So people should note that ahead of time.
Yeah they should put the note ahead of time [so that] we know their need. Otherwise we call them and say, "I'm sorry, we can't do that." For example, people they make a reservation online and they tell you they want a fountain view. For the first time coming to Marcel's. Should I bring them a fountain and tell them this is the view for the fountain? So I call them and tell them, "Hey, we don't have windows. There's no view."

How do you deal with your VIP guests if you don't have any tables left, even those you keep open every night?
In that case I find a table. It's not a problem at all.

How so?
In like 10 minutes I get them a table. Because people sometimes they're on desserts or whatever, I go to the table, I entertain them, tell them, "Hey, can I move you? Can I do desserts at the bar? I'll buy you a cognac, whatever. I have this problem at the door." I'll make story and most of the people they understand.

What's the most outrageous request that you have accommodated?
I've been in a situation that I have to present the ring for engagement. All the time. I act like I'm taking the dessert to a table and I put the ring on a plate, cover it and I go to the table and I tell the lady, "Listen, the chef saw you not eat that much so he sent you an extra course. But the real chef is this guy next to you. He made that at home and bring it with him and I just put it in the oven, warm it up and I brought it to you. And I take the cloche off and she see the ring and he finishes the rest."

That's cute. What's your success rate for accepting the proposal?
Well, so far in 13 years, I saw only one reject.

I wanted to ask you too about the high-roller receipt you guys posted on Facebook. Is that something you see often?
Yeah. We see it often.

Was that one in particular pretty outrageous?
He's a regular that guy. But we have regulars like they spent, I don't know, two people sometimes $5,000. We have a lot of people with Black American Express. They really want to enjoy food and wine.

Was the regular whose receipt that was, was he upset at all?
No.

What's the one gatekeeper tool you need to do your job?
The key is to be always professional, no matter what. When you open the door, you treat every guest from the valet to the valet with the same attitude. You cannot ignore when the dining room is empty and there is only one table in the beginning or in the end, you have to give them the same attention as was busy before. Every day when I open the door, I say to my staff, "Showtime. Put your smiles on, forget about your problems and let's do it again."