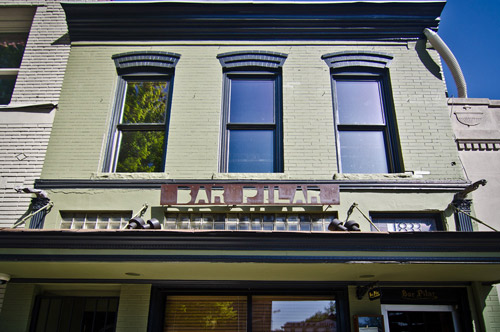 Everyone knows Bar Pilar is a great place to go for a drink, but apparently it's also a great place to score glassware if you're the stealing type. In the latest edition of Shit People Steal, general manager Jonathan Fain shares his strategies for dealing with thieves, including that one time he chased a thief to Manny & Olga's to get back one of Bar Pilar's copper mugs for the Moscow Mule.

Also commonly stolen? The Mexican Coke bottles that Fain himself crafts into glasses for the Cuba Libre Float. Take it away, Jonathan:

So, our most-stolen glassware is our Moscow Mule mugs followed by the Mexican Coke glasses. On average, we lose about 5 copper mugs a week. I changed the glassware for the Moscow Mule mug downstairs in hopes to keep more of them around, and we now only serve them in mugs upstairs. For the most part this has worked, but some people also have learned that they can go upstairs and get the glasses.

One night I was helping out at the bar and a guy in his late 20's ordered a Moscow Mule. I watched him not only walk out the door with a full drink but he walked into Manny and Olgas (next-door pizza place). When I jumped out from behind the bar, I caught him and told him I was calling the cops. He walked back to Pilar and said "It's ok, I'll drink it here." I think the biggest problem with people is the lack of respect for places. It was clear this guy came here often and was upset when I told him he was not going to be able to drink.

The Mexican coke glasses are awesome made by me in my spare time. I make about 50 at a time. People love the glasses because they look antiquated and old-school. Since we reopened the second floor, we've "mysteriously" lost about 20 of the Coke glasses. And now that we're serving our Cuba Libre Float (made with rum, Mexican coke, vanilla ice cream, topped with house brandied cherries and absinthe whipped cream) downstairs for "dessert," we're keeping a closer eye on them to make sure they don't walk out the door.