Mandalay, Secret, Dos Amigos and More On the Way

Share All sharing options for: Mandalay, Secret, Dos Amigos and More On the Way 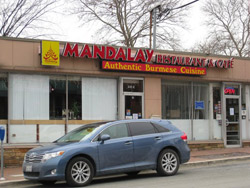 1) Shaw: The City Paper confirms that Silver Spring's Mandalay is headed to Shaw in October. Across from the City Market at O development, the Burmese restaurant will have both a smaller dining room and a smaller menu compared to the original. They're also thinking of adding a tasting menu and a patio. [PLYWOOD]

2) Shaw: Prince of Petworth talks to the owner of Secret Lounge and Sports Bar, which is opening on 9th Street soon. The first floor will be the sports bar while the next two floors will be the lounge. The spot will have hookah plus a menu that splits up between American dishes — burgers, chicken fingers, club sandwiches — and Ethiopian food. [POST-PLYWOOD]

4) Falls Church: The Going Out Gurus tweet an update that Victor Albisu's Taco Bamba opening has been pushed to the fall. [PLYWOOD]

5) Barracks Row: Prince of Petworth gets an update on the Chipotle destined for Barracks Row — it should open on August 7. [PLYWOOD]