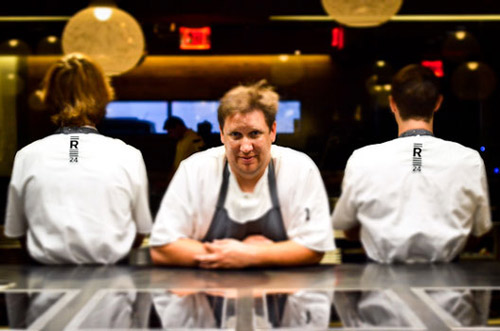 Now that the restaurant has been open for a year, Cooper is regaining the energy for new concepts, as well as a possible resurrection of Rogue Sessions — he speculates another set will be in the fall. Here he chats with Eater on this past year's changes to the "rogue" dining establishment nestled inside Blagden Alley.

How are you feeling as Rogue 24 approaches its first year?
Fantastic.

What will you and your staff be doing to celebrate that one-year anniversary?
We're going to have a party Saturday night [after the restaurant closes]. And we're going to close for two weeks to go on break.

Are you going anywhere or resting?
Most of my team will be traveling.

How about you? Are you staying in or...
I'm doing stuff that I can't tell you guys about.

Not even one of them?
Nope. It's all a surprise. Being ambigious with Eater DC is the best thing to do.

After the break, is there anything new that you're going to put on the menu?
Yes.

What will that be?
It's a surprise.

I guess that's what you'll be working on during the two-week break?
Absolutely. We're going through a metamorphosis just like a butterfly. You have to change. You have to evolve. If you don't evolve, there's no reason to do what we're doing. So there'll be a lot of different things.

A one-year anniversary is a big deal for restaurants. How do you feel being in business for one year with this particular restaurant?
We've gone through the same thing that every restaurant has done when it first opened. My guess is that the media has put a spotlight on the people that have come and go. The only thing major that happened was I had open heart surgery. That's it. Everything else is the normal life cycles of what restaurants go through. I'm fortunate enough to put a team together that's passionate about what they do. They're dedicated. They thrive in the environment that we have. They do a wonderful job.

I read the Forbes' piece about your leadership style and maintaining a good staff. What do you do to keep them happy?
Oh, I can't keep them happy. Are you kidding me? You put people in an environment that they want to thrive and excel. That's what you do. You give them the tools and foundation to do that. We have endless amounts of ways to be creative in this restaurant. That's important. For me, it's the importance of what the [daily] creative process is than what in a normal restaurant. We have all this idea of what we're doing. We work within the system. We adapt and we change as frequently as we can.

What else do you do to cultivate creativity?
We all collaborate, we all talk, we all read. There are a lot of things that we do. We have a 4:45 p.m. lineup or family meal every day that we talk about what we're doing, where we're going, what we want to do. Servers generally talk about pairings and things they've seen and want to try. Everybody in this restaurant needs to know everything that's going on at all times otherwise it falls flat.

What do you look for in someone you're going to hire?
Determination. If they're determined and passionate about what they do, then I can teach them. If they're not and think they know more than everyone else, then this isn't a environment for them. This is not a restaurant that's going to get you a hundred thousand dollars and land you a TV spot. This is a restaurant that's about the creativity of food.

Why did you choose Blagden Alley [as the location for Rogue 24]? I know you wanted a location that would eventually grow. But why this particular area?
I fell in love with the building. It wasn't downtown. It wasn't mainstream. It's extremely broad and cutting edge. There are a lot of moving elements in this alley. For example, if you look down at the front of the window, you see the pedicab guys. That building's changed hands in the last year. Right next to them is the limo guy. It's a 105 degrees and he's grilling on a tandoori. There's one of the internationally well-known lithographic companies down there. There's a lot going on.

How long did it take you to find this spot?
About 25 years. My whole career. The building drew me in. It's what all chefs strive for — a place of their own. I was fortunate enough to work for great people, be able to open up a restaurant that would allow me to do whatever I wanted to do and still have it survive. And all the people who think that we were never going to make it or too arrogant over this or over that, it's all bullshit because nobody knows the true inner workings of what we do unless you're here. And you want to be within the team. Cooking in restaurants is not an individual sport. It's a team sport. If you don't have a great team, you're not going to survive.

Let's go to the dining contract...
How many restaurants do you think don't do that at this level? All of them do. The problem is everybody wants to see everybody fail instead of wanting them to be good. That's just society. What we're doing is trying to extract as much information about the guest as we can so we can give them the ultimate dining experience. There's nothing wrong with that. Do we do it anymore? No. CityEats develops it for us so when you make a reservation everything is there.

How about that no food photography policy?
Have you been to Komi? Why is it a problem that Komi says no cell phones and no photographs and they don't get blasted, but we do? What's the difference? Because it's Komi? No. It's a policy that we instilled because we want our guests to have a dining experience. Have we lightened that policy? Yes. People take photographs all the time.

Then why did you lighten the policy?
Because people are going to do it anyways. We just ask not to use their flash...It's a society of Twitter, Facebook and Foursquare. We can't deny it. Accept it and move on.

You say "accept it" but do you think it's still a little disturbing?
It's a horrible thing to be able to go to dinner with someone and all they want to do is take photographs, instead of actually having a conversation and a nice dining experience. I work 90 hours a week. If I want to dine with someone at this level or even at Toki Underground, I don't my companion to take photographs. That means they're not paying attention to what we're talking about or the environment we're in. Let's say you go out to dinner with Brad Pitt. Would you want to take the photographs of the food or look at Brad Pitt?

What's up with the website?
Some shit right? Some fucking douche hacked it. We're redoing it so a new set will be live in September.

One last bit, how's your health?
Outstanding that I'm talking to you. I'm great.