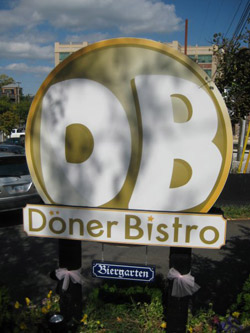 1) Adams Morgan: Prince of Petworth reports that Shawarma King has closed and will be replaced with a doner kebab restaurant named Doner Bistro, which already has a location in Leesburg. These kebabs are modeled after the street food that's ubiquitous in Germany and other parts of Europe, though the Leesburg shop's menu also includes currywurst, schnitzel, beer, falafel and doner boxes — meat and french fries in a box. [PLYWOOD]

2) Annandale: Patch brings word that Tanpopo Ramen House is moving into the space next to A&J's Annandale location this summer. Obviously, it will have ramen plus a sushi bar when it opens in "early August." [PLYWOOD]

3) H Street: Frozen Tropics has the liquor license for a restaurant named The Spot on H that will offer American cuisine and two-to-three-piece jazz band and a summer garden. [PLYWOOD]

4) Columbia Pike: ARLnow learns that Karamara Ethiopian has soft-opened on Columbia Pike with a limited menu while they await their liquor license and a grand opening in August. [POST-PLYWOOD]

5) Pentagon City: Also over at ARLnow is news that LA-based Tutti Frutti is expanding its froyo empire with a location on South Fern Street. It's slated to open in late August or early September. [PLYWOOD]