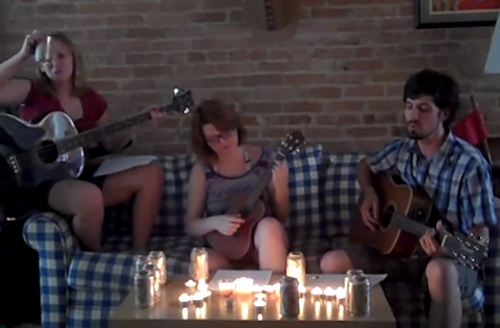 Screengrab of the group Acoustic By Circumstance performing their latest single, "F*ck You Pepco". [YouTube]

PEPCO—Sometimes cursing at the electric company is best put into song. Three frustrated housemates put their feelings to a few folksy chords and uploaded it to YouTube. We have the video but be warned the hilarity comes with many not safe for work descriptions.

CRAIGSLIST—This week in tiny living spaces we found a two hundred and fifty square foot apartment for $1,300 a month. It is halfway between Dupont and Logan Circles so you what you don't get in space you make up for in location.

ARLINGTON—Did you spend the 4th of July wishing you had a better view of the fireworks? If so, there's an Arlington pad with a rooftop deck that will have you making new friends every summer once they see how great a view you have of the mall.

DUPONT CIRCLE—There may be other up and coming neighborhoods, but Dupont is still the place to be. Uber looked at their statistics and decided this nabe is the most 'stereotypical' DC neighborhood (while Deanwood is the least) and they came up with a funky infographic that might just make you dizzy. Then there's the ten most affordable properties to buy in Dupont and a few rentals for less than $1,500.

MCLEAN—Out in McLean there's an amenity-laden house for people who are ready to retire from the full-time jobs and live the good life. The four-car garage has a hydraulic car lift, the wet bar has a working fountain, there's a private lake, and an ice cream parlor in the basement. We have the video tour in case you want to see how to live the relaxed life.

BETHESDA—If contemporary is your thing, then Robert Gurney's masterpiece in the suburbs has come down by five hundred thousand to entice you. Now a six and a half million dollar listing the house has amazing infinity pool and glassy bridges connecting the different parts of the house.

RACKED—This week in fashion there's a sale on at Georgetown's relish, the first flagship store for Hobo Bags in Annapolis, and a sidewalk sale at Fairfax Corner.

LEARN SOMETHING—We occasionally take a look at architectural features common to our city and this week we focused on Brise Soleil, a low-cost way to cut down on air conditioning bills but still keep the sunshine coming in during the winter.