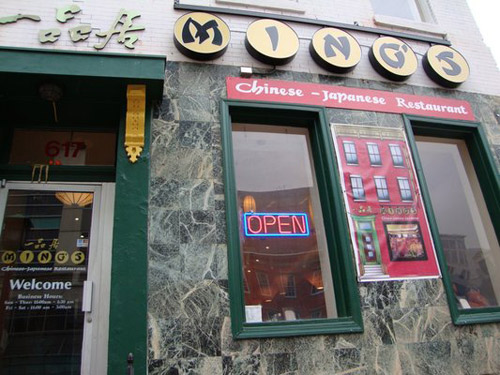 During Chinese Food Week, The Source's executive chef Scott Drewno shared a few of his favorite places for Asian cuisine in the DC area — including Oriental East, Present, Mala Tang, Toki Underground and, most especially, Ming's in Chinatown. Now, though, he reveals his hidden gems for all his various needs, from that all-important pho fix to when he's dining solo. Surprise, surprise, Ming's is back, along with Viet Bistro, Mayur Kabab House, Wagshal's and Red Apron:

"Ming's...I should probably start paying them rent...deep fried pork chops are my go-to. Viet Bistro at Eden Center is where I get my pho fix on. Mayur Kabab House is my solo dining lunch spot when my wife is working. It's a killer buffet and I eat like an animal. Wagshal's...smoked brisket sammy...so tasty. Red Apron...I track "Frank" and find me some killer dogs."

The Source by Wolfgang Puck

A ‘Saved by the Bell’-Themed Bar Zooms Into Capitol Hill