All the Intel on the Obamas' Dinner at Mintwood Place

Share All sharing options for: All the Intel on the Obamas' Dinner at Mintwood Place

Well, lots of luck getting a table at Mintwood Place now. As rumored yesterday evening, Barack and Michelle Obama took the latest winners in the presidential campaign's Dinner With Barack series to the Adams Morgan restaurant for dinner — which means its already high buzz-factor is likely to through the roof now. When reached by telephone last night after the President departed, chef Cedric Maupillier shared some intel on the dinner — drawing the line at what they ate, but sharing what it was like from the restaurant's perspective. 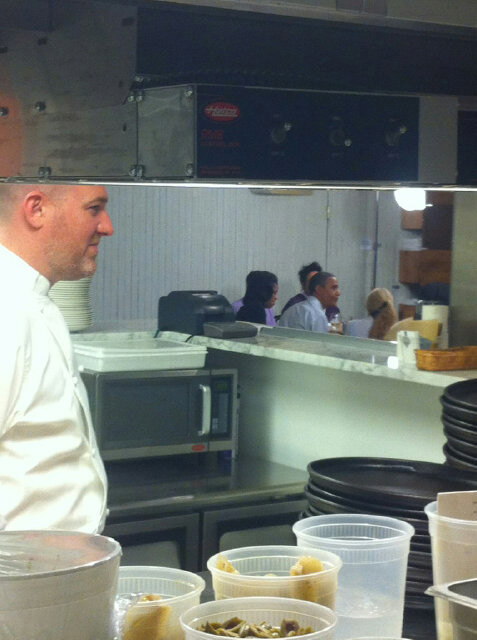 According to Maupillier, the Obama campaign had reached out to Mintwood Place a couple of weeks ago to ask them to cater an event on Monday, when the restaurant is usually closed. But, he said, it wasn't until yesterday that they realized the President was coming: "Of course we've been through a lot of security checks and the neighborhood had been blocked. Security were everywhere. The motorcade went through Adams Morgan. It's something very rare to see in this neighborhood."

But beyond the visit being kind of a big deal for a revitalizing Adams Morgan, it was obviously a big deal for Maupillier and the restaurant's staff, too. Maupillier says he has wished for the opportunity to serve the President and First Lady ever since watching them walk down Pennsylvania Avenue on Inauguration Day — and finally that day came last night.

They both looked happy and beautiful and they were very, very kind to all the staff from the dishwasher who had the chance to shake their hand to the owners of the restaurant who were there and took pictures with them when they arrived. Even the Secret Service point the time to them and say it's time to go now, it's time to go, they wanted to really thank everyone in the restaurant. So a great experience overall for all of us. And it's kind of a dream come true for a chef who works in Washington, DC.

Though Maupillier didn't want to comment on what food the President and First Lady ordered, he notes that there were a lot of greens on the table, they finished their plates and Michelle Obama asked a lot of questions about the spices in her dish. Of course, in this Instagram from Barack Obama himself, it looks like he ordered the bacon cheeseburger, which should come as no surprise, really.

And, well, apparently the dinner went really well, from Maupillier's perspective at least: "You should know that from the Secret Service to the staff of the President and the First Lady, they were all super kind and they left with a big smile and they were all very thankful about what we did. I always liked President Obama for who he was becoming president of this country and now I respect him more because he's a great family man. And the lady, she is the boss. Trust me."