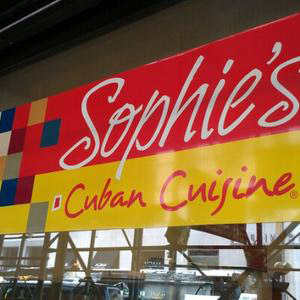 1) Bloomingdale: The City Paper reports that Bloomingdale is getting a tapas restaurant by the name of Costa Brava from an industry vet who has managed at James Hoban and The Front Page. The small plates here will be big on seafood and draw from the owner's Spanish heritage. There's no chef on board yet, but apparently the owner is describing the design as "Barcelona meets 18th Street Lounge." [PLYWOOD]

2) Dupont Circle: New York-based Sophie's Cuban Cuisine is looking to infiltrate the DC market, according to the Washington Business Journal, starting with a location at 1134 19th Street, NW. The New York locations offer delivery and catering with a menu of Cuban specialties like pernil, plaintains and more. After this first location opens in 2013, expect three more to follow per a licensing agreement. [PRE-PLYWOOD]

3) H Street: The next new restaurant headed to the ever-booming H Street NE is a steakhouse named Mythology. Per H Street Great Street, the restaurant "will offer a modern Chophouse menu with quality steaks, fish, and other fresh, simply prepared proteins." It aims to be family-friendly with a jazz brunch and one of the partners behind it is currently the general manager at The Atlas Room, so there's some neighborhood cred. [PLYWOOD]

4) Petworth: DCmud reports on a forthcoming pop-up restaurant space named eatsPlace that aims to be "a commercial, community kitchen for a variety of chefs using local ingredients" beginning in the spring of 2013. [PLYWOOD]

5) North Bethesda: Jimmy John's is opening another area location very soon, according to BethesdaNow. They're still hiring staff, but apparently the store is pretty much ready to go in the North Bethesda Market. [POST-PLYWOOD]

6) NoMa: Prince of Petworth spies some signage indicating that Starbucks is moving into the Archstone building at 1st and M Street NE. [PLYWOOD]