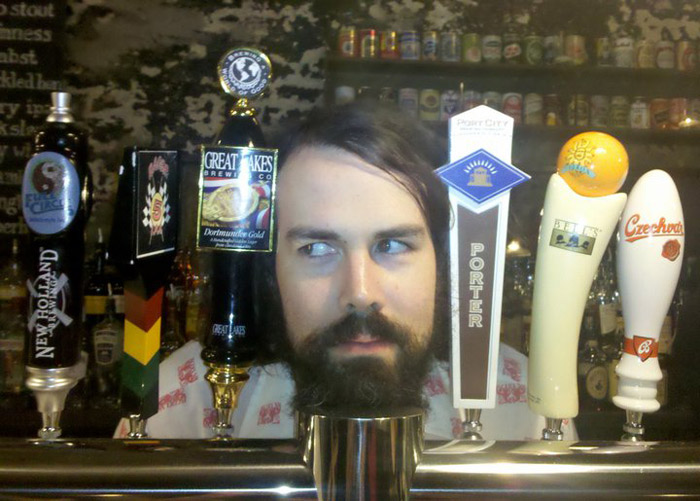 Above the barbecue station at American Ice Company at 9th and V Streets hangs a chalkboard farm scene. Framed by drawings of cows and pigs featured at the barbecue joint, the barn wears a sign that reads "American" in letters that evoke nostalgia.

Created by American Ice bartender Patrick Owens, aka Patso, chalk art is among Owens' many talents. If you're in Adams Morgan or Penn Quarter, chances are you've seen his work, whether it's block letter panels at the remodeled Jaleo or signs along Adams Morgan's 18th Street strip as depicted in an article on his work in the Washington Post.

Patso is no stranger to nostalgia. The bartender who also works at Tabard Inn looks like a 70's dad-slash-porn star with chops, a serious 'stache, and longish wavy hair. His shirt of choice vary among heavy metal icons and vintage snap westerns. He also sports a full-sleeve tattoo inspired by mid-century modern illustrator Charley Harper, the minimalist who drew birds, bees, bears and other wildlife.

Patso's medium isn't just chalk art. It's booze. The bartender at American Ice since it opened in December 2010, Owens has become a main character in DC's cocktail scene.

"I'll have a Patso drink," is a common request at American Ice. A spin on a Negroni he's made since it opened, "it's just equal parts Plymouth gin, Bonal Quinquinna, and Aperol garnished with orange peel," he says.

As notable as his cocktails is the monthly event he started last year, the industry-insidery Spirits in Black. At the direction of Owens, AMICO features a guest bartender who spearheads an ambitious cocktail list with drinks variations called the Five Finger Death Punch spiked with Viognier, honey syrup and distilled habanero or the Turbo Negroni with dry sherry, Bonal, Campari and Benedictine. The evening is a delightfully cacophonus tribute to heavy metal, replete with growling vocals, awesome hair, and head banging.

Among his other talents? A way with words. Read his behind the bar observations on Twitter or his rewrite of Depeche Mode lyrics over on Instagram — "Menu's unknown but you'll dine alone/On the flesh and bone of a cantalope/ wrap you in prosciutto, or toss you in a crudo." Better yet, find time to stop by when the bar is quiet and listen as he tells a story or two.