All the latest you want to know about where you live from Curbed DC... 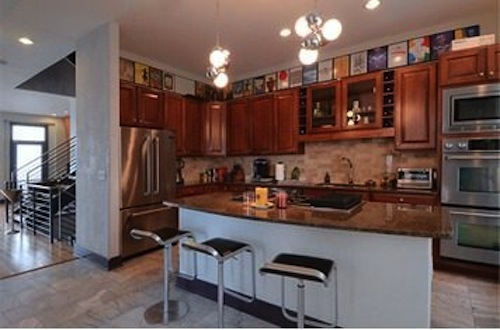 The kitchen inside Michael Phelps' Baltimore home, which he just sold for a loss. [HeidiKraussRealEstate]

BALTIMORE—Michael Phelps has sold his Baltimore home for a loss of $400K, but really he isn't going to be too concerned about that is he? If you want one last look at the bachelor pad click on over.

MCLEAN—This suburb made the news a few times this week. There's a proposed build on the market for $32M, which is crazy. Until this house the most expensive house in McLean was asking $17.9M, but that came down in price this week. Then there's even more plans for huge buildings near Tysons Corner—this time managed by Capital One.

RACKED DC—J. Crew opened this week in Penn Quarter and Gilt has some more deals online, plus extra retail news.

SILVER SPRING—In honor of Shark Week Discovery has brought back Chompie—the inflatable shark that looks like it crashed through their building. If he was a real shark he would weigh 84,000 pounds.

AFFORDABLE LIVING—Each week we try to find affordable places to buy and rent in a different neighborhood but since late summer is the slow time for real estate we're taking a hiatus until the listings pick back up again. So we looked back at the least expensive properties in DC's most popular neighborhoods and rentals for under $1,500 in the same places.

MARYLAND—If anyone wants a huge waterfront mansion for under a million dollars, this one is available. It is in great condition and has come down from $4M to be a short sale at $975,000. Seven porches, a roof top cupola, and too many luxury features to count.