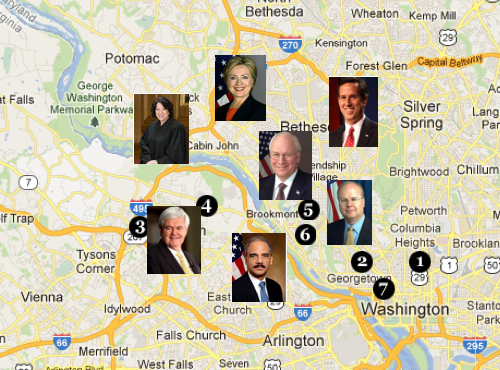 POLITICS—The politicians took over Curbed this week with a look at Councilmember Michael Brown's house that is for sale (after a price chop) and a heat map of where some bigger name politicians live. Click over for Hillary Clinton, Eric Holder, Karl Rove, and the others you see in the picture.

SLOGANWIRE—Speaking of politics, our chart guru Jonathan Miller graphed the housing inventory for the past several elections years and saw that each of the past transition had a different trend.

COLUMBIA HEIGHTSOn the northerly end of 14th Street, just south of Upshur Park, is this new four unit condo building. We have a few pictures and a price list for you to look at, but there are two open houses this weekend if you want to see them in person.

ARLINGTONThere's a new rental building of sixty-seven units coming in November and they have just released a price list and are starting to hold information sessions. Click over for details.

HOTTEST BROKERAfter thousands of votes the winner of our summer contest was Lindsay Dreyer of City Chic Real Estate.

DECOR WIREIf any vegans out there wish they could hang animal trophy heads on their wall but don't want to get with the whole killing thing, they can make their dreams come true with these cardboard replicas of things like moose, deer, and a human skull.

RACKEDSeveral men's suit stores are opening, along with two Ann Taylors and a Lilly Pulitzer. Plus there's another Fashion Night Out to tell you about.

SOLD STUFFNow that the spring selling season is finished and the houses that found buyers have had their deals finalized we started a look back at what sold and for what price.