Shake Shack to Open Next DC Spot at the Spy Museum

Share All sharing options for: Shake Shack to Open Next DC Spot at the Spy Museum 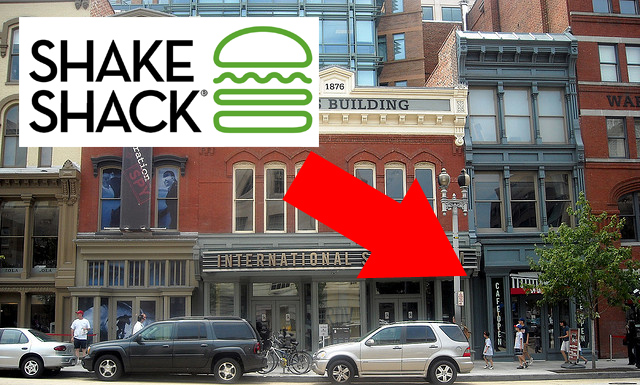 Those rumors placing Shake Shack at the International Spy Museum are 100 percent correct: the New York-based chain announced today that it is opening a third DC location at the museum in mid-2013. As usual, they'll offer a menu of burgers, dogs, shakes, fries and more — plus undoubtedly long lines.

Shake Shack first came to DC in May of last year with a location in Dupont Circle, followed by an outpost at Nationals Park. And now it looks like they're going hard after the tourist crowd with this Penn Quarter location, which is closer not only to museums like the Spy Museum and the National Portrait Gallery, but also to the National Mall itself. Here's the full press release.

UPDATE: Though a reasonable assumption may have been that Shake Shack would take over the recently shuttered Zola space, both Shake Shack and the Spy Museum confirm that the chain is actually going into the Spy City Café space at 9th and F streets.

“We’ve been amazed by the warm reception we’ve been given over the past year, and
our team is proud to grow our roots even deeper in the Washington community,” said
Randy Garutti, Shake Shack CEO. “This Shack will be in the heart of our Nation’s
Capital and will serve a vibrant neighborhood where families, professionals, and visitors
come together every day.”

Like its siblings, the newest addition to the Shack family will be constructed with
recycled and sustainable materials, wherever possible, and feature energy-efficient
kitchen equipment and LED lighting throughout the space. The menu will feature all the Shake Shack classics, as well as a selection of frozen custard concretes created
specifically for this location, with names and ingredients that pay homage to the local
community.

For more information, including a list of all current Shake Shack locations, please visit
www.shakeshack.com.