La Tagliatella, Uptown Tap House and More on the Way

Share All sharing options for: La Tagliatella, Uptown Tap House and More on the Way 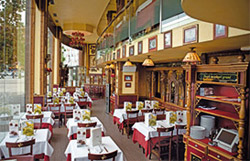 1) Clarendon: ARLnow reports that the old Restaurant 3 space has a new tenant in La Tagliatella, an Italian restaurant chain that's based in Spain. This would be one of the chain's first US locations, along with one headed to Atlanta. [PRE-PLYWOOD]

3) Chevy Chase: Patch hears that Mi Cocina is moving into the former M Cafe space in the Collection at Chevy Chase, bringing with it a menu full of standard Tex-Mex dishes. It should open in March 2013. [PRE-PLYWOOD]

4) Arlington: Another Chipotle is headed to Arlington, this time in the Lee Heights shopping center, according to ARLnow. Plywood is up and they hope to open on October 16. [PLYWOOD]

5) Shaw: DCmud has it that FroZenYo is infiltrating the Howard University campus with a location of self-serve froyo in the Wonder Plaza near the bookstore. [PRE-PLYWOOD]

6) H Street: The folks behind Le Chat Noir in Friendship Heights are getting set to open up their new French restaurant Le Grenier on H Street, per Frozen Tropics, who learns from Margaret Holwill that the final inspection has been completed and they hope to open on August 17. [POST-PLYWOOD]