Share All sharing options for: Another Protein Bar, Notting Hill and More Coming 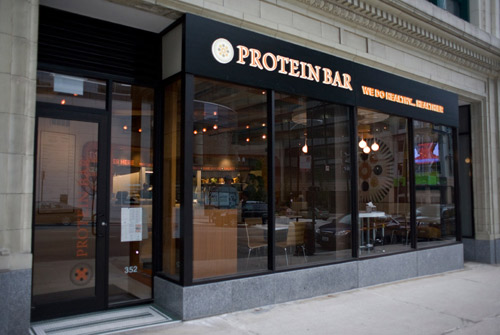 1) Farragut: The Washington Business Journal learns that Chicago-based Protein Bar isn't finished quite yet with Washington, DC. The health-conscious chain has signed a lease at 19th and K streets in an old Cosi space. It'll have an outdoor patio and should open in spring of 2013. [PRE-PLYWOOD]

2) Alexandria: Patch has it that a restaurant named Notting Hill will be moving into the vacated Le Gaulois space after it undertakes some renovations. The restaurant's website shares a variety of lunch, brunch, dinner and market menus with dishes that are all very specific as to their sourcing. [PLYWOOD]

3) Bethesda: Bethesda Magazine reports that the owner of Tommy Joe's is opening a new and as-yet-unnamed restaurant in a soon-to-be renovated building in Bethesda. Chef Jed Fox, a former sous chef at Bistro Bis and Ris, has been tapped for the project and plans "upscale bar food" that will combine "French technique with local ingredients, focusing on Mid-Atlantic and Southern cuisine." It aims to open in summer 2013. [PRE-PLYWOOD]

4) Shaw: The head bartender of Maple is opening a restaurant on 9th Street near Seasonal Pantry, according to Prince of Petworth — though it's unclear whether the restaurant or the owner is named Sherman Golden. Maybe both! [PRE-PLYWOOD]

5) Gaithersburg: The Great American Restaurants group is headed to Maryland now with a Coastal Flats outpost in Gaithersburg that is slated to open in 2014, per the WBJ. [PRE-PLYWOOD]