Welcome to a special edition of One Year In, a feature in which Eater sits down for a chat with the chefs and owners of restaurants celebrating their one year anniversary. This time, the first in a two-part series marking the anniversary of Chipotle's new Asian concept ShopHouse Southeast Asian Kitchen. 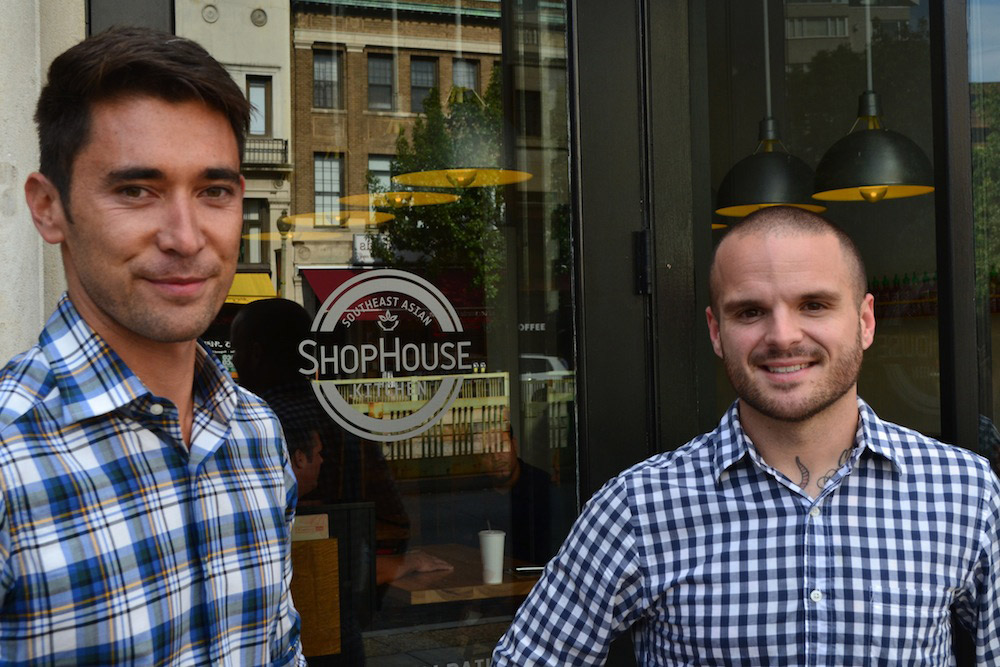 Last year, Chipotle opened the first-ever location of its new Asian concept ShopHouse Southeast Asian Kitchen in Dupont Circle. While the buzz was at an epic high, the chain's strategy was to play it coy about its new project aside from leaked photos left as open files on the restaurant's website. In the first part of this interview, Chipotle culinary manager Nate Appleman and director of concept development Tim Wildin reflect on the beginnings of ShopHouse: How it was partially inspired by Chipotle founder Steve Ells' shitty Thai takeout, what they learned on a research trip, and why opening in New York first would have been too easy.

How did the concept come about?
TW: Steve has been talking about it for years, wanting to do something other than Chipotle. Because Chipotle's success isn't directly tied to burritos and tacos. NA: It's the quality of the food. It's the system. Which people try to copy over and over. TW: They copy the veneer, though. They copy the system as far as they see quick-service. And it's almost become a statement now, "Oh, it's the Chipotle of Greek food, it's the Chipotle of Indian food. They're not really looking into the sourcing of their materials and their ingredients like we do.

TW: But going back to how it all happened, Steve had been talking about it forever and we decided to finally do it. Chipotle had been running really well, so he felt like he had the time to do it. He loves Thai food. He orders it all the time in the office and sometimes it's pretty shitty takeout Thai. So I said to him, "Let's go there. Let's take a research trip. You, me, culinary guys, and let's eat our way through and come up with menu ideas."

And honestly it was pretty easy. The idea process is made pretty easy because food culture over there really shows you that "fast food" can be something else entirely from what we think it is in the US. It can be fresh and healthy and nutritious and lightning quick. Food is everywhere. Anyone that's ever been over to Thailand can tell you food is a national obsession.

So did you take the trip before you were sure you wanted to do the Southeast Asian concept?
TW: Yes. While we were over there I think it probably became pretty clear that this was the right thing to do. None of this was driven by market research or customers. Nothing. NA: It would have been totally different. TW: It would be totally different and it probably wouldn't be successful. This was driven by a love of really good food. But by the end of that trip certainly we had a pretty good idea of what the menu would be directionally.

How did the original menu-planning process go?
NA: Honestly, it started out as an Asian Chipotle. It was the most basic that you can think of: "Take everything on the Chipotle line and make it Asian." And then it progressed into something completely different.

What are some examples of how it progressed?
NA: The original menus had a braised pork, kind of like carnitas. TW: And that went into like a barbecued pork thing for a little while, sort of boring. NA: Right. I've always been one who rebelled, I guess. So I looked at it, I was like, "That's completely boring. Why don't we do meatballs?" And meatballs were born.

TW: If you look at the serve line at ShopHouse, it's like a spread that you would see at a dinner table in Southeast Asia. NA: Or like a cart on the side of the street. A bunch of different little things that you pick. I remember when we first opened, I think I saw something on one of those websites that sounds like "Help" that somebody was like, "There's nothing authentic about the way this food is served." It's like, well, we're not making authentic food. We never claimed to do that. But if you've ever been to Thailand or Bangkok, you see all these vibrant colors and different dishes all splayed out on a little table.

What other inspirations did you get on the research trip?
NA: I definitely had a new appreciation for noodles. Growing up here, when you think of noodles, you think of pasta immediately. It's hard to get past that initial thought of noodles have to be hot. But if you're in a hot environment like Thailand or actually even eating this food, eating the cold noodle with the hot curry and the grilled meats is just a great combination that I think is unusual.

So why did you go with DC for the first location?
TW: Demographically, it's really dense. We're constantly cooking to replenish fresh food on the line, right? So for our model to work, we need people coming in all the time. Also, especially in Dupont Circle you have a lot of busy, young professionals. This kind of food works for them.

We thought it would be great to test it here. Nate and I both live in New York. It's easy for us to get here. And it's I think more of a test than it is in New York City. I think if we open this in New York City, 100 percent this would be successful. NA: It would have been too easy. TW: We're sort of trying to prove this concept. NA: Look how many restaurants are in New York. There's a lot of shitty Thai restaurants and people accept that and it's OK because it's quick, it's fast, it's easy, it's available. Coming here presented its challenges that pushed us to our limits.

Tomorrow, in part two, Appleman and Wildin elaborate on some of these changes they've made to ShopHouse and what to expect in terms of future locations.