Welcome to a special edition of One Year In, a feature in which Eater sits down for a chat with the chefs and owners of restaurants celebrating their one year anniversary. This time, the second in a two-part series marking the anniversary of Chipotle's new Asian concept ShopHouse Southeast Asian Kitchen. 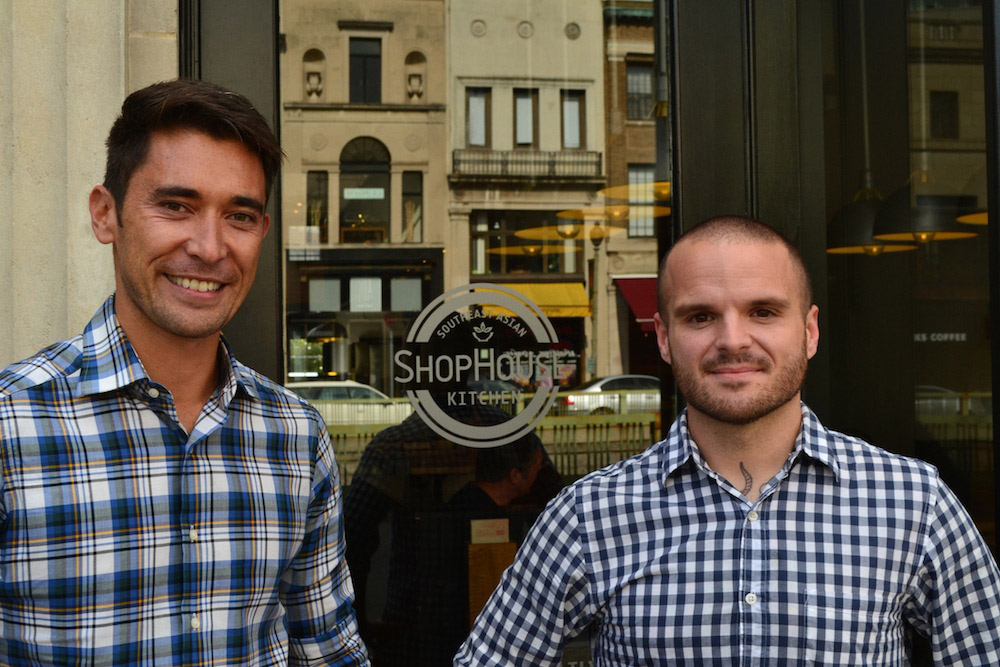 In yesterday's interview, Chipotle culinary manager Nate Appleman and director of concept development Tim Wildin talked about how they came up with the idea for ShopHouse Southeast Asian Kitchen, which opened its first-ever location in Dupont Circle last year. In the final installment of the two-part interview, they look back at the quiet-yet-buzz-filled opening and a year of constantly tweaking the concept — plus they dish on ShopHouse's second location that is bound for Georgetown and why a chain that opens three restaurants in a week is taking its sweet time with this one.

Leading up to the opening there was a crazy amount of buzz, but you guys weren't saying all that much. Why?
NA: We didn't know what to say. TW: We didn't know what ShopHouse was ultimately going to be. Also, to give a restaurant any kind of chance for success, you need to have a soft opening. To cram it full and have all this buzz around the opening creates for a shitty customer experience. The lines will be long, no one knows what they're doing. So we wanted to keep it quiet.

How did your opening go?
NA: We were changing things day of opening. Major components of the menu were being changed days before. Given that, the opening went well. TW: Opening any restaurant is always hard. I think this one was smooth. NA: It was. But also we had a really good crew to do it. [Chipotle founder] Steve [Ells] was here opening the restaurant. Just his presence alone being here says something. I don't know many other CEOs out there that would have been on the line serving customers Day One.

What are some of the biggest changes you've made?
NA: I'd say the biggest change was doing away with the banh mi. TW: That was big. It was bold. I think we all have different reasons [for getting rid of it]. For me, it was if my mom can come here once ever and only have one thing, if she had the banh mi I would be sad. I would want her to have anything else. NA: I think we just thought if we can't do it right, don't do it. I don't know if most people would have made that decision because the sales were high. But we weren't happy with it because it wasn't great.

When did it come to that point?
NA: The week before opening for me. There were definitely talks. And finally it was like, it's not our focus. I think the bowl is the focus. TW: And I think, too, it allowed us to serve our customers quicker, which is an important promise that we have to keep with our guests. People only have an hour for lunch, they want to get through that line quick. Doing only the bowl moves a lot faster. NA: As a by-product of that, it turned out that now we're a gluten-free restaurant.

Any other changes that you've made?
TW: Most recently we changed the steak. NA: Trying to be more sustainable. We obviously base things on flavor. But because Chipotle is what it is, we fall under the same responsibility of doing the right thing. And the right thing in that sense is using other cuts of meat. TW: We were using hangar steak when we started. Great eating, I love it. But with scalability in mind, it's not a sustainable solution. NA: There's only one hangar on a cow. So if we have two restaurants we're taking that many more hangars. That's just not responsible. It's not what Chipotle would do and it's not how we should start this.

And what have you found, if anything, that works with Chipotle but hasn't worked here?
TW: At Chipotle, you can kind of pile on every single salsa and it works. Here, we've really training our crew to suggest guests get one from each section of the menu. I think that's the best eating experience here. NA: When you start piling on like a buffet, you lose the core of the bowl. It's kind of a mishmash, if you will, of different flavors.

Was that something you were training employees to do from the beginning?
NA: Yes. But a lot of times the customers dictate what kind of restaurant you are. Chipotle didn't start out the way that it is now. They used to charge for sour cream, extra sour cream, extra cheese. The customers took control. For the better. But right now we're trying to own this.

One of the reasons you came to DC was to better gauge the concept's success. So how's it going?
TW: I don't know what the right amount of time to gauge the public's adoption of us. We're still open and we have a line every day and we have great food. I don't know when it will be that we will say, "This is successful." I know that we're serving, I think, pretty amazing food. NA: It's to be seen, I think, because the changes that we've made.

In the beginning the food was spicy. Super spicy. TW: Part of this was, though, supply chain. When we opened, there was a shortage in supplies of chiles. We were using Taiwanese chiles for awhile and they were mouth-numbingly hot. We were essentially burning people's faces off. NA: And I would say that hindered us. With any restaurant opening you have a spike in business. You have people coming to check it out and then a sales drop. But we saw that our food was too spicy. If we didn't think it was too spicy, we definitely wouldn't have changed it.

And so you've got a second location in the works in Georgetown.
TW: That's coming up in January. It should open in January.

What is the status in terms of rolling it out beyond Georgetown and beyond DC?
TW: It's a little too early to speculate on further rollouts. Nate and my job right now is to really oversee this one restaurant because this is ShopHouse. The brand is only what happens within these four walls and we're charged with watching over this.

People were speculating whether this was going to move quickly across the country.
NA: I don't know if there was an incentive to do that. TW: There's no incentive because if you look at Chipotle, we open about 150 a year. NA: Three a week. TW: That'll go on for a long time. Chipotle doesn't really need ShopHouse. But ShopHouse certainly can be a vehicle for growth in the future. And right now only having one restaurant has, like Nate said, allowed us to be nimble, constantly on our feet, constantly evaluating and tweaking and making things better.

And recently Momofuku's Dave Chang dropped a blind item about working with a fast-casual chain. There was some speculation that it was you guys. Was he involved originally?
TW: We really can't comment on any speculation. You'd have to ask him who that would be.

Did you work with him?
TW: No, I've never met him. I've never worked with him.

And does it feel like it's been a year?
NA: I can't believe it's been a year. TW: It feels like maybe three months or something to me. I mean, we have seen a lot of changes and we've come a long way with the menu. It's a lot of really detailed hard work to get there. Because working in this environment where your economics are so tight — our prices top out at $7.50 — you have to think about everything coming through your door. It's different than running restaurants when you have freedom, you can buy something and put it on that day.

NA: Yeah, it gives you discipline because you understand the traceability aspect of what we do. As Chipotle, we put ourselves out there with the things that we do. It's a publicly traded company. So we keep that in mind. You can't just go out to the store and buy a fish sauce. You've got to make sure that fish sauce is good. And what does that mean to be good? It means that it carries the same ideals that we do as a company. Which means it costs more.