Welcome back to Eater in the Embassy, where we ask ambassadors as well as the chefs behind DC's diplomatic receptions and events about their native cuisine, working in an embassy kitchen and their favorite places to eat around the city. In this latest edition: Blaise Chérif, ambassador of Guinea to the United States, and his chef Nestor Lamah. 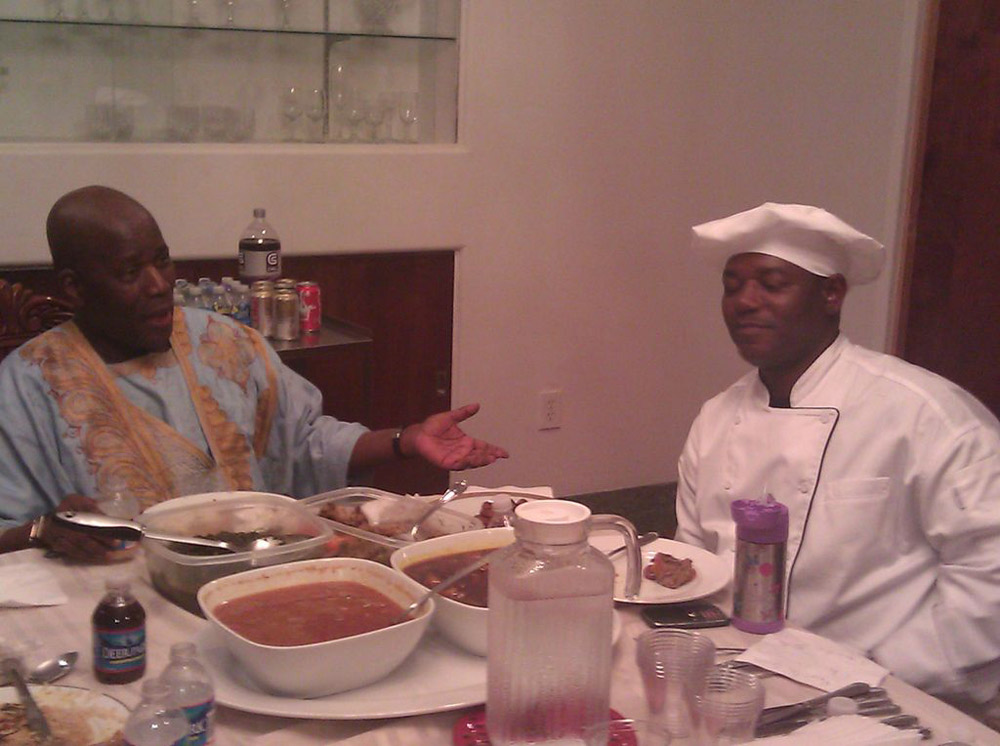 It's been a little more than a year since Blaise Chérif arrived in Washington as the Republic of Guinea's ambassador to the United States — more than enough time to explore the treasures of American cuisine and develop homesickness for his favorite dishes from his West African village. In the latest edition of Eater in the Embassy, Amb. Chérif and his embassy chef Nestor Lamah talk about traditional Guinean cuisine, where to find it in the DC area and that one time Chérif and some of his fellow ambassadors were forced to eat at KFC. And liked it.

Once again, Eater partnered up with WAMU 88.5 Metro Connection host Rebecca Sheir for this interview — so do go ahead and take a listen.

Amy McKeever: When you came to the United States, what was the food you found you missed the most from home?
Blaise Chérif: Rice cooked in a Guinean way with a good sauce, with cassava leaves. I didn't find that in the United States.
Nestor Lamah: Yes, it was not easy to find cassava leaves here and we miss it. Even now we still miss it. It is a very very good food for our country.

AM: And can you tell me a little bit more about the cuisine of Guinea and some of the traditions and staple dishes?
BC: I think to answer your question, you should keep in mind that in Guinea there are four different regions, meaning four different cultures and four different foods. I belong to the forest part of Guinea, which food is a bit different from the one from the coast. So the basis of the food in Guinea is rice, whatever region you are in. But the sauce differs from region to another region.

AM: And I noticed that you have these dishes set in large platters. Is food usually served family-style on big platters?
BC: It depends. When you are in the rural area like my village we don't have plates. We put food on big plates and everybody eats with their hands. We don't use a fork. We don't use a spoon in a traditional manner. Now if you go to the capital or those who claim to be part of the upper class people then they use forks and spoons and forks. Normally we eat collectively in the same plate.
NL: When we want to eat, we wash our hands in water and we eat with our hands. That's all we do.
BC: Maybe I could add that traditionally when we eat, people are sitting outside. And whoever is passing, we will call him and invite him to come and eat. If we don't know your name and we don't know where you are from and we are eating, we just invite you to come and sit and eat with us. This is the traditional way of life in Guinea.

AM: When you arrived here, how was it finding some of the other dishes or flavors or spices even that you wanted from home?
NL: It wasn't easy but we would just ask the people and they would tell us the name of some international store. We do have some stores that are very, very good in Langley Park, Hyattsville and Takoma Park. They have a big store there named Red Apple.

Rebecca Sheir: Are there any restaurants anywhere in the Washington region where you can find anything close to what you ate back in Guinea?
BC: I don't know if there is any African restaurant in Washington DC. There are some in New York, but I didn't see any Guinean restaurant in Washington DC. Maybe it's a good idea to think about it. Once I leave my job as ambassador maybe I could get involved in business.
NL: But our food costs a lot of money and takes a lot of time to cook. Five to six hours to cook all of this. So if you want to open a restaurant here, it's going to be a hard job and you'll have to wake up at 3 o' clock in the morning to cook so people can be ready to eat at 11 and 12 and 2.

AM: And how is planning meals for diplomatic parties? Do you work together to come up with a menu?
BC: On the 2nd of October is our independence day. We'll be having cocktails in this residence, so we will resort to a caterer to come. But at the same time we will ask some Guinean women in DC to cook for our guests for them to taste Guinean food. They will cook rice in different sauces. This is the way we organize at the diplomatic level.

AM: So we know that there aren't any Guinean restaurants here in DC but are there restaurants that you have discovered? Do you have some favorite restaurants of any cuisine?
BC: Yes, I like Asian restaurants like Filipino or Thai restaurants because their foods are not too far away from our food. A lot of rice. From time to time we also go to American restaurants, of course, with some good steaks that are sometimes too big for us.
NL: I think it was a buffet from a China buffet. I like their food because it almost looks like African food. I like Papa John's pizza, yes, the ingredients and the pizza dough from Papa John's is fresh for me so I like it.
BC: Let me confess something. Last week we were in Charlotte for the convention and there were no restaurants around our hotel, so we ambassadors, we went to KFC. My kids used to go to KFC and I used to say, "Oh really, KFC?" But this time I was compelled to go to KFC because we were starving.

RS: What did you order?
BC: It was chicken wings. It was good.

RS: Are there certain sweets or desserts that are traditional in Guinea?
NL: We call this one plantains and it is sweet. It comes like this with rice, oil, and a little sauce.
BC: I should add that because they are younger than me they think we have dessert in Africa. Traditionally there is no dessert in Africa. We have the main dish, rice or cassava. There is no dessert, there is no entrée, nothing. We use bananas in the afternoon when you feel a bit hungry, but we have not really dessert or appetizer in the traditional way of life in our villages.

RS: What do you eat for breakfast?
BC: For breakfast we could use the plantain if you warm up then you put a bit of palm oil and you eat it in the morning. Of it could be boiled rice with some sugar in it.

RS: Wine made from palms?
BC: From palm trees. It's what we have in our region, palm wine. Maybe I will find some for you one of these days.

AM: Is that easy to find here?
NL: It can be found here.
BC: Yes, you have to look. Otherwise we mainly drink water in our region, traditionally. We are talking about the traditional family, not those who are at the upper class level who wants to live like in the western countries, having their white wine or red wine on the table with some salads and things. We don't know that traditionally in our country.

RS: You mentioned salads. Do you grow vegetables and crops and things? Are there certain native crops or plants, things like that?
?BC: It depends on the region. In my forest region we don't know salad. We grow a lot of leaves which we use to make sauce. But not as an appetizer or something.
NL: We have spinach, we have eggplant. We have small, green pepper and we have hot pepper. All of that. Salad just came to Guinea maybe 15 or 20 years ago. We don't have salad.
BC: Traditionally. But of course when you go to the coastal region in the big cities you have people who live like in the Western countries. Me, I'm a very traditional person. I eat mainly traditional dishes.