All the latest news about where you live from Curbed DC... 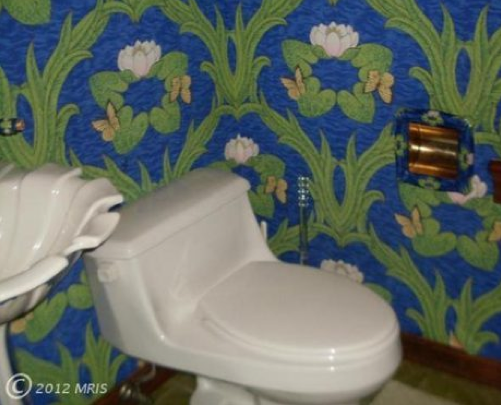 Jesse Jackson Jr is out of toilet paper. [Trulia]

DUPONT CIRCLE—Jesse Jackson Jr who is on medical leave from his gig as a member of the House of Representatives has listed his Victorian-style rowhouse for $2.5M. Looks like they have a hanging garden in their foyer and an attempt at a wallpaper replica in their bathroom.

CHINATOWN—The MLK library needs a lot of work and no one wants to get rid of it since a famous architect designed it. We have some renderings of how it might look once it is finished.

MCLEAN—A contemporary home designed by Georgetown-based architect Hugh Newell Jacobsen hit the market for $9M about six months ago and sold recently for $7M. If glassy weird angles are your thing, check out the photos.

RACKED DC—John Fluevog is officially open for those who likes shoes, but don't want shoes that look like anyone elses. Plus there's more news on what's coming to Georgetown Mall, DSW is hiring, and other retail happenings.

THE MALL—Controversy over the Eisenhower Memorial is enough to make us press the snooze button, but updated renderings that tried to address said controversy get our attention.

ARLINGTON—A new apartment building is finishing up and they have a gated dog park to show off. There's a Yappy Hour this weekend, with prizes, and they'll also have people on hand to discuss rentals options (much less exciting than who will win cutest dog).

HOUSING MARKET—Did you think Bernanke's announcement that interest rates will stay low for a few years was going to improve the housing market? Think again...market analyst, appraiser, and Curbed contributor Jonathan Miller has a different idea. We have the video of his appearance on Bloomberg.