Jeff Tunks and Gus DiMillo on the First Year at District Commons and Burger, Tap & Shake

Share All sharing options for: Jeff Tunks and Gus DiMillo on the First Year at District Commons and Burger, Tap & Shake 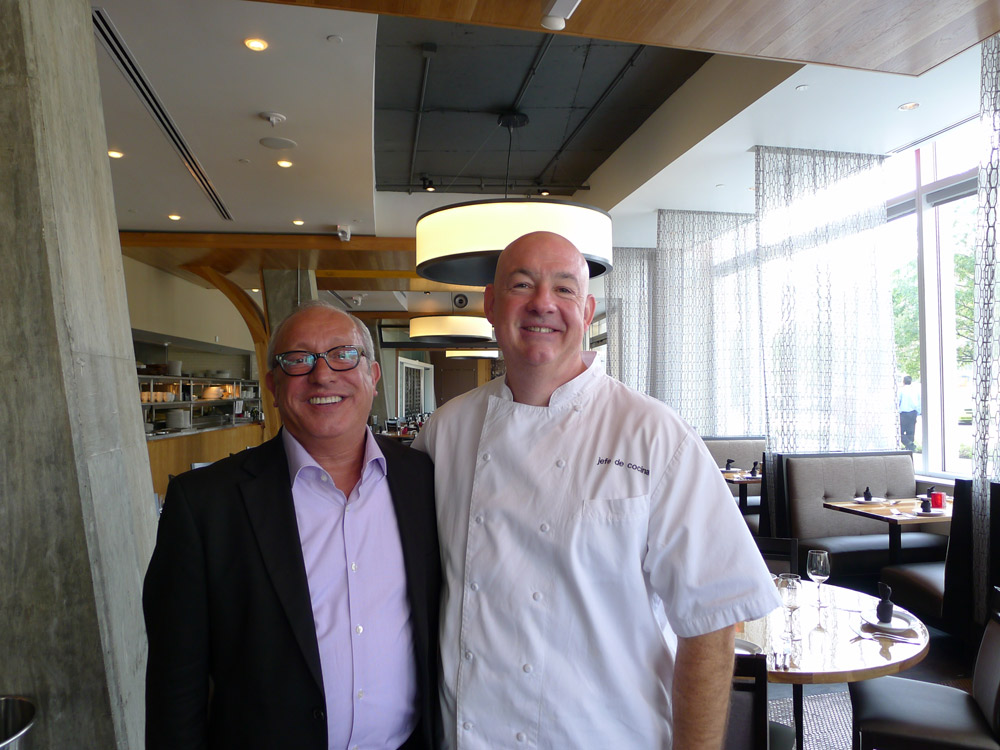 Last October, Passion Food Hospitality's Jeff Tunks and Gus DiMillo added to their restaurant portfolio with a twofer in Foggy Bottom, opening the contemporary, Americana-themed tavern District Commons and its sister restaurant next door, the fast-casual Burger Tap & Shake. Now, on the eve of opening their newest restaurant, Fuego Cocina and Tequileria in Clarendon, Tunks and DiMillo reflect on their first anniversary in Foggy Bottom. Here, they chat with Eater about revitalizing the neighborhood, the challenges of opening their first fast-casual concept, why doctors are lining up for cheeseburgers, hosting Oprah for lunch, and how late night chicken dinners helped draw in GW students.

How did you come up with the concept?
GD: At the time there were so many Belgian places being opened, so many French, we thought we were doing so many incredible things here in this country, why not do something that shows off all these small farmers and co-ops that are going on? JT: We've had some unique timings with our restaurant openings. We opened up Acadiana the week Katrina hit, doing the Louisiana-style restaurant. We opened up PassionFish the week in October 2008 when the banks failed. This was obviously with the economy in mind when we opened this restaurant. This was our first restaurant this far west, and we realized with the university next door, the Metro stop, the full-time residents, we wanted a concept that would be very approachable, price-point wise, feeling-wise.

And were you actively looking in Foggy Bottom?
JT: Our landlord here is Boston Properties, and we have our best tenant-landlord relationship with them. They are also our landlord over at Acadiana and out at Passionfish. So they approached us and said, "We have a great development that's going to revitalize this part of the city and we'd like you to be part of it." And after walking through the floor plans with them at their office and on site with hardhats we saw what a great — GD: Potential it had. They're always right. When he said he had a great spot, he really meant it. You can't beat the demographics.

And this area seems so much more revitalized in just a year.
JT: It was very I think under-served for many years. We were down here for pre-opening. This complex opened up in stages. I think Devon & Blakely might've been first open, and then the other fast-casuals: Roti, Sweetgreen, Whole Foods, Circa — there was a line out the door for all those every day at noon. Where did people eat lunch before this whole project was here? What really sealed the deal for us is the opportunity to do the two-in-one concept. Having the opportunity to do the fast-casual in what I think is one of the most visible, viable corners in the city was a great addition for us. GD: The space was too big for one restaurant, just perfect to do two.

Was that one of the challenges to opening this as opposed to your other restaurants? Having two in one?
JT: It still is a challenge. GD: It's amazing how much comes out of that kitchen. JT: The restaurant is very linear, but the kitchen is very narrow. It's like a spine, because the kitchen goes all the way from here to BTS. Our biggest challenge has been the limitation of the size of the back of the house. because of all the food that has to come here to support both restaurants, with all the the meat we cut in-house and grind in-house. GD: Well, the whole nature of what you are trying to do. Everything is made in house.

So are there things you've learned throughout the year to make this run smoother?
JT: We've had to. That's one thing about being a restaurateur. You have to be able to adapt to your challenges. We've staggered our start time for a lot of our prep staff. It's a time management juggling act. We've always done this style of restaurant where we can limit our reservations to a certain number of people until we get our sea legs. When you have a fast-casual, you really can't control anything. So we decided to open [BTS] first so we could have all hands on deck. People were in line a half hour before we even opened. And here, you can't call up a bakery and order more buns. We make them. It's really about anticipating sales and needs and then being able to fluctuate to the rhythm of business.

We were curious, what would happen when the college was out of session? Because the university is such a huge core for us, as the hospital is. But we had such a great amount of local and non-local families and tourists come through here. In fact, our busiest day was the Fourth of July. That's been our busiest day ever at BTS so far. We did over 1200 people that day.

Sounds like a scene.
JT: It was a scene. There was a line the entire day. GD: Even though Bobby Flay opened [nearby], they come to us. There's a lot of doctors, hospital people, college kids. They're all conscious about what they are eating now. We are making everything in house, our meat is fresh, not frozen, no hormones. A burger is a mainstay of American life. But if you're going to have one, you try to get the best possible one because they're not really healthy. JT: I always love to see the doctors line up for burgers. When you have a cardiologist in line eating a hamburger, you know you've done something right.

And do you feel like the two restaurants complement each other?
JT: I very much do. We dovetail a lot of the production, just for space. The same Texas chili that we're serving here as an appetizer is one of our components for our chili cheeseburger over there. Our pimento cheese fritters here is the same pimento cheese that we do for our Southern burger. GD: They both go along with that whole Americana theme. And I love the fact that the bathrooms are shared. I love to see people's faces—they use the restroom and they come out and they go through the wrong door. They'll walk into BTS instead of District Commons. JT: "I only had a couple glasses of wine. Did I get disoriented that fast? Am I in the same place?"

How is the late night bar menu going?
JT: It's going good. That's the one hit that I feel was more probably enjoyed with the college kids, because it was a value. Our busiest night is Sunday, our chicken dinner night. That's the one that now college is back we see those sales going up. Our first week we opened —we have chicken fried steak on Wednesday, which is probably our heartiest, biggest portion — I think the entire lacrosse team came in from GW. The plates came back to the kitchen, it didn't look like there was food ever on the plate.

Can you share any details from Oprah's visit?
JT: That was pretty exciting. There was a security SUV with tinted windows, and a guy came inside and said, do you have room for a six-top? He had an earpiece and stuff. We had no idea. In DC, it could be anyone. Next thing you know, Oprah came in with her friend Gayle and sat in the middle of the dining room. It's probably generated the biggest buzz of anybody who has ever eaten in our restaurants in the past 15 years. GD: The first lady has eaten at our restaurants. The president has eaten at our restaurants. Everybody you can think of has eaten at one time in one our restaurants now. Supreme Court justices — all of them. But no one of them has generated the publicity that Oprah did.

Do you have any changes planned for the next year?
JT: Our biggest knock or complaint is to mitigate some of the noise level. We read all of our Open Table reviews and try to get input from customers GD: We put in some acoustical paneling. I think it's a work in progress. The problem is when the the bar fills up, the noise level gets so high. JT: You have all this glass and hard surfaces with this look. That's an ongoing thing that we're probably going to have to address.

We've opened for brunch on Saturday and Sunday. We've staggered openings through the course of the year, and we actually got permitted for a big patio outside. GD: Finally! It took us all summer. JT: We wanted to be to sure to take care of current business levels, so that we can acclimate ourselves. It's like going high altitude. You just can't go to 14,000 feet right away. You gotta go to 10,000. But something to look forward to is next spring there will be a big patio out front.

So does it feel like a year?
GD: It goes so fast, I can't believe it's been a year. But to me, the last 15 years have gone by like a blur. JT: Unfortunately, Gus, I think the older you get, the faster time goes. We usually take between two and three years between restaurants to open, that just helps train our staff. This unique opportunity with Market Tavern in Clarendon is usually not in the way we're programmed. Having that open has sort of preoccupied us a little bit and taken our mind off of the year anniversary here a little bit.

And you're onto the next one.
JT: Another new child.