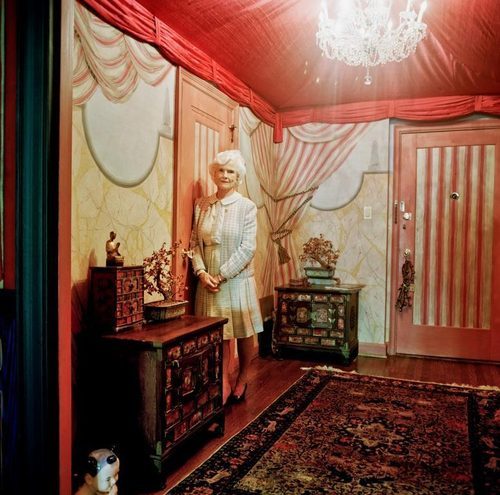 DC—John McCain's mother turned 100 earlier this year and Town&Country has a photo shoot of her at home in her Washington home. We have a few pictures of the McCain matriarch and there are many more in this month's issue of the magazine.

KALORAMA—Former White House spokesperson Joe Lockhart has listed his row house for only $300K more than he paid. It's over three million dollars, but still.

LOGAN CIRCLE—There's a good deal in one of the hottest neighborhoods around. This two bed, two bath is asking $637K and comes with a private patio. Click over for pictures and the open house schedule this weekend.

MCLEAN—There's a $13M house just dripping with ornate furnishings in every room. The bonkers decor is asking a lot of your eyes, but your brain can handle it.

CHARITY WIRE—In the name of fun and raising money a fashion show using materials for home furnishings took place with some eyebrow-raising outfits making their way down the runway. Why, yes, you can make a dress out of cork and wire mesh. Paging Lady Gaga.

NOMA—There's a new apartment building coming to NoMa this December and they just released the prices for their one and two bedroom units (no studios here). Prices start at $1750 for a one-bedroom.

DMV—Compared to the rest of the country, things haven't been terrible for local real estate, but they haven't been great either. Except for these nine zip codes that have had their best year ever.

GEORGETOWN—Two mightily historical homes just went on the market. A house on Cooke's Row built by Henry Cooke (who was DC's first 'territorial governor') and another on Cox's Row built by John Cox (who was Georgetown's first mayor. Georgetown had mayors? Who knew.)

CHINATOWN—LivingSocial's bar was the scene of this week's Bar Crawl Living. We found a few homes within stumbling distance of the drinking outpost.

GEORGETOWN—Dominique Strauss-Kahn and his wife Anne Sinclair didn't have much luck selling their Dumbarton St house, so they quietly took it off the market over Labor Day.