Here now is the first look inside Fuego Cocina y Tequileria, which aims to open its doors in Clarendon next week, possibly as early as Wednesday. This latest project from Passion Food Hospitality follows quickly on the heels of year-old sister restaurants District Commons and Burger, Tap and Shake. It's also the very first time the restaurant group has taken over an existing restaurant space, which is how they've been able to turn this around so fast since taking over the ill-fated Harry's Tap Room/Market Tavern space.

Fuego's design intends to evoke an "old cantina in Mexico City that's been revived with a modern edge," according to press materials. To that end, the lower level of the restaurant will be the tequileria with a 50-foot wraparound bar showcasing more than 100 tequilas, winding embossed leather couches in the lounge, mix-and-match chairs, and brushed-metal stools (holdovers from the Market Tavern days) at a stone bar. 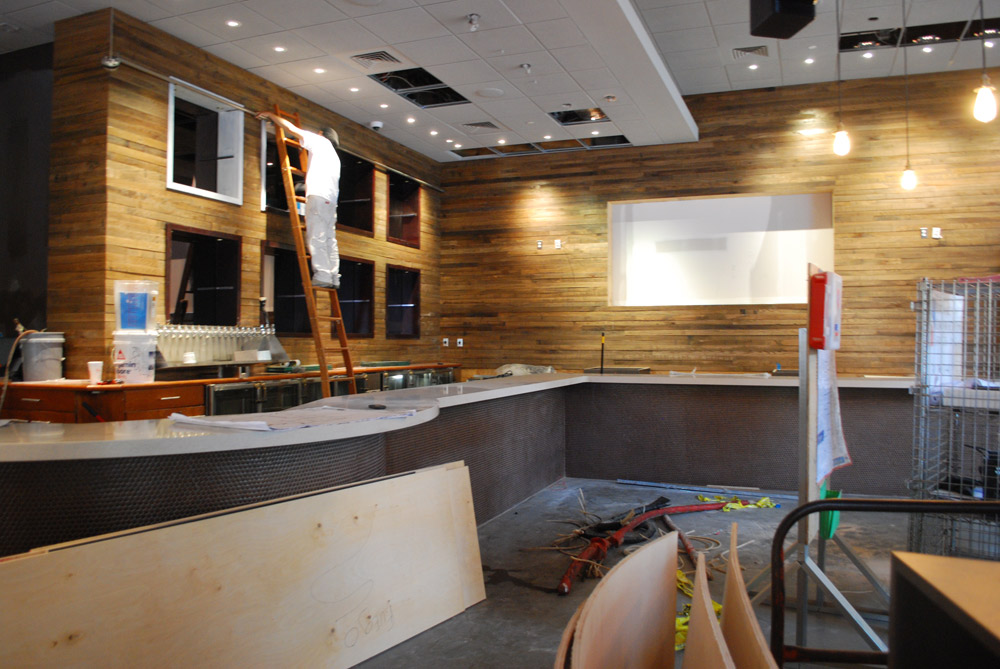 Leading the way upstairs is a winding staircase adorned with a brightly colored mural that was just recently completed. Meanwhile, the second level of the restaurant is home to the dining room and open kitchen, meaning diners can watch as Fuego employees make their tortillas. Design-wise, expect light colors, distressed wood in smaller panels and a linear fireplace to bring out the fuego. There's a full line of banquettes plus a mix of four-tops — with a chef's table to the side lit by dangling pendant lights.

Passion Food's own Alfredo Solis is collaborating on the menu here with the group's co-owner and chef Jeff Tunks. There's going to be the usual suspects of tostados, tamales, quesadillas and tacos — including house varieties such as chipotle shrimp or spit-roasted pork with pineapple. Other entrees include braised duck with black mole and birria with Jalisco-style roasted goat. They're also planning a brunch menu with huevos rancheros and chilaquiles, which will be offered on Saturdays and Sundays.

As of right now, Passion Food is planning to hold mock services early next week and open to the public on Wednesday evening — though a rep notes that could be pushed until the next day. Fuego Cocina y Tequileria will only be open for dinner service at first, with plans to add lunch in the coming months.