The weekly real estate and neighborhood news from Curbed DC... 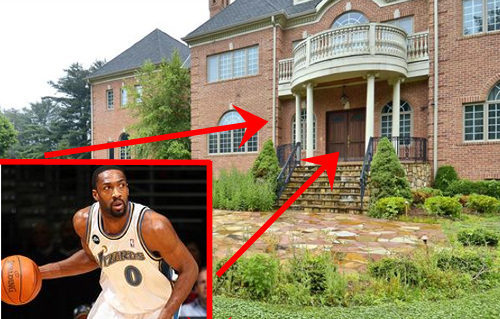 GREAT FALLS—You may have heard that manly man Gilbert Arenas is trying to sell his house in Great Falls. But so far no one has jumped at the chance to be the owner of this grotto/shark tank/movie theater-rich abode. There's an open house this weekend if you want to see it all in person.

ARCHITECTURE—Anyone out there interested in architecture theory might be interested in this new building at Gallaudet designed to be 'attuned to deaf eyes'. Features like armrests and door handles are used sparingly, but tall windows and wide hallways are abundant. Click over for the reasons why.

MCLEAN—Less than a year ago Ted Leonsis sold this house to his friend for $9M (even though he wanted $14M a few years prior). Said friend, Chris Rogers of Nextel, tried to sell it a few months later for $9.5M but had no luck. It finally sold for much less than he wanted.

VIRGINIA—Sign of the apocalypse or publicity gimmick? Tareq Salahi is running for governor of Virginia and is hosting a fundraiser with the theme "Crash the Candidate's BBQ". Har-har, Salahi. What's next, the swingers party "Abscond With The Gate-Crasher's Wife"?

KALORAMA—Rapper Biz Markie went on Celebrity House Hunting and said he wanted to buy this house, but never ended up purchasing it. A few price cuts later it finally sold. We have the clip of Biz Markie checking out three properties in the District.

ROAD RAGE—Sick of tolls? They haven't hit us fully yet, but someone has already penned an anthem against them. "Highway Robbery" is about a privately owned toll road in West Virginia, but the feelings are the same if you drive on any of the places closer to here that charge/will charge.

ALEXANDRIA—The number crunchers looked at which school districts are the most and least popular. Turns out Alexandria has the fourth least desirable school district in the country.

COLUMBIA HEIGHTS—We're merging Curbed and Eater in a new series we're calling Bar Crawl Living. This week we looked at some good places to live near Red Derby.

TOURISTS VS. US—Someone has an art project on Flickr that mapped where tourists take pictures versus locals and it pans out pretty much how you would expect. We don't go to the Mall very often.

RACKED DC—Pentagon City is welcoming a Kate Spade and Fire & Ice, plus more retail news that happened this week.