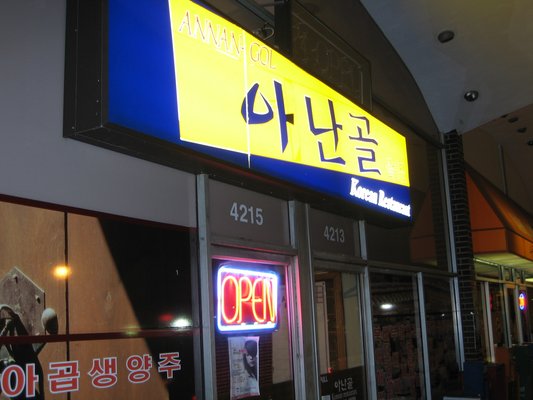 Dean Gold may prepare rustic Italian classics at his Cleveland Park restaurant, Dino, but when he and his wife want to hit up a restaurant, it's usually for affordable and authentic Korean food. He shared some of his favorite under-the-radar spots with Eater.

"There's one that we like, Annangol. It's sort of down the street from Honey Pig and across from Gom Ba Woo. They specialize in barbecue. They have a couple of duck dishes and a pork on the bone that's really fabulous. But unlike a lot of places, they don't grill at the table. They have this big, huge, industrial-grade grill in the back of the dining room. They grill on that and then they put a glass plate on the individual table grill. You put your meat on that and it continues to sizzle at the table. So it's fully cooked at the beginning, and you get those crispy bits at the end. And they have fabulous banchan."

"There's another one: [Hwa Gae Jang Tuh], that's a favorite. It's on Viers Mill, just north of Twinbrook. There's typical Korean food but one of the things we really love is they do the stone grill for the barbecue. It's really superb. What they do fabulously that few places do well is the brisket and the tongue. You have to get two orders but they usually let us split an order of each since we go there so often. And it's fabulous banchan. Really nice people, really hard working people."

"And then, the other one that's been around forever but they've remodeled it and cleaned it up is Seoul Soondae. For around $12 you get a big bowl of blood sausage. They use the unmentionable parts of the cow including parts that only the lady cow has. It's truly the best $12.95 you can spend if you like blood sausage. Of course, if you don't like blood sausage, it's an absolute nightmare. And very good banchan. The menu is huge and we just started going back there again, because for a long time they were like "Oh, you're not Korean, you don't want that.' But now it's completely different and they know we like Korean food, like the good stuff."