Share All sharing options for: Amy Robinson On the Always-Packed Founding Farmers 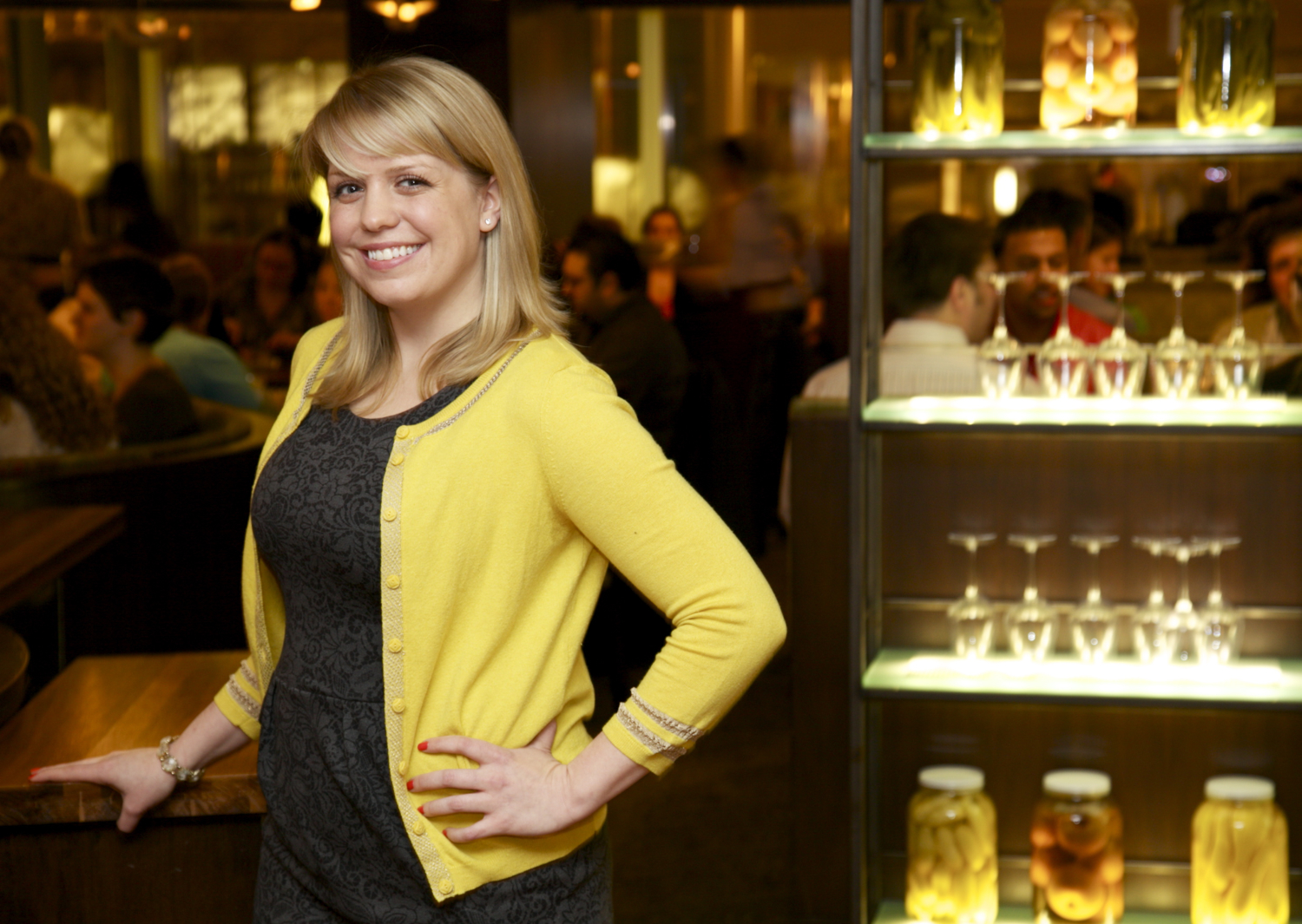 Founding Farmers. It's been around since 2008, it isn't super pricey and there are two other restaurants from the same company for DC-area residents to patronize. Despite all these factors, it's still one of the toughest tables around for diners to snag a reservation. Hospitality coordinator Amy Robinson gives Eater the lowdown on her job, where you get to take care of guests like Matchbox 20, and must make sure you have a Red Bull in hand to see you through the busiest days.

It's Saturday night at prime time. What kind of wait should I be expecting for a table?
Typically our wait averages an hour to an hour half around that time. We do offer the full menu at the bar, which is always available first come, first serve. A lot of our guests tend to add themselves to the wait list, so they'll end up popping over to have a drink at the bar or they'll walk down and check out the White House. We'll suggest they check back closer to their quote time.

How much does dinner service vs breakfast vs brunch matter, in terms of craziness?
I would say there's a wait for every service we offer. Generally we do an average of 900 covers for brunch Saturday or Sunday, and then typically a Friday or Saturday night dinner is 600 to 700 covers.

How have the openings of Farmers Fishers Bakers and the Potomac Founding Farmers affected the business at the original?
I think overall it's had a positive impact, where guests are more interested in what we're doing as a company as a whole, what direction we're going in, how we're growing. I have not seen it reflect on our business in the sense that we haven't lost any guests. If anything we have gained more guests. Now that Farmers Fishers Bakers has opened, we are letting a lot of our guests know that it's available as a second option if they're not able to get the reservation they want.

How much of your seating is reservations versus walk-ins?
I would say we're about 75 percent reservations.

Do you see a lot of cancellations?
It tends to vary shift to shift, what's going on, if it's rainy that day or if there's a big football game in the area. That tends to mean more no-shows or cancellations. But other than that our reservations are committed to us. If they're making a reservation for a place a week or a month in advance for somewhere that's hard to get into, nine times out of ten they'll honor that.

Were you slammed at the onset of opening, or was it more of a steady growth? Have there been ups and downs in terms of how busy the place is?
I'd say we've been consistently busy.

?How are weeknights??
Weeknights still have a wait. I would say the Tuesday night average is between 45 minutes and an your and a half. In general our bar is busier between 6 and 8 p.m. on weeknights, with people coming in to have an after-work cocktail.

What's your favorite table?
I would say our VIP tables are the circular booths upstairs, 211 and 212. VIPs seem to want them. They kind of stand alone by themselves.

Has anyone ever bribed you for a seat?
Oh absolutely. Mostly we are offered bribes of money.

Does it work?
Honestly, my staff and I always say, 'Thank you so much for the gesture, however, in fairness to everyone we can't do anything, but there could always be a cancellation.'

How often would you say you get a bribe attempt?
I would say maybe twice a week.

Where do your regulars come from at Founding Farmers? The neighborhood? Offices?
Definitely a lot of GW folks come through. And we also have tourists that become regulars during their stay in DC. For example, over New Year's we had a couple from Norway. They must have came in five times. We get that a lot.

Have you seen a lot of VIPS in the restaurant?
Absolutely. We typically don't talk about them until well after they're gone out of respect for their privacy. But those we can mention include Martha Stewart, the Bidens, Matchbox 20 and quite a few "Top Chefs."

Were you there for any of them?
I was there for Matchbox 20. They were very humble, very nice. They made a point to meet the staff. Very genuine guys.

Have you gotten any odd requests from regulars?
This past weekend, we had a guest request that they wanted to order some beignets and have "Will You Marry Me?" written on top of the, and to have that on the table.

Did you see it play out?
I unfortunately left because I had a cold, but I hear it went really well. We do get a lot of flower deliveries to the restaurant, too, where guests have flowers delivered beforehand and want them placed on the table for something like an anniversary.

Are there any dishes that just about everyone orders at Founding Farmers?
The chicken and waffles are definitely among our big sellers. A lot of guests tend to come from far away for that. Definitely our brunch, our red velvet pancakes. And our beignets, of course.

What's your favorite item on the menu?
Ooh, that's a tough one. I would have to say that I really enjoy the ranch popcorn. I know it's something so small, but the whole staff is excited when it's ranch popcorn day. Also, the meatless burger off the vegan menu.

How do most tourists end up finding you guys?
Through their concierge.

Do you rely on any tools to do your job?
OpenTable definitely works for us, but for me personally, I just need a good night's sleep and a Red Bull.

Where do you eat when you're off the clock??
I tend to like to go to Jaleo. And also Brasserie Beck.

· All Previous Editions of The Gatekeepers [-EDC-]