All the latest real estate news from Curbed DC... 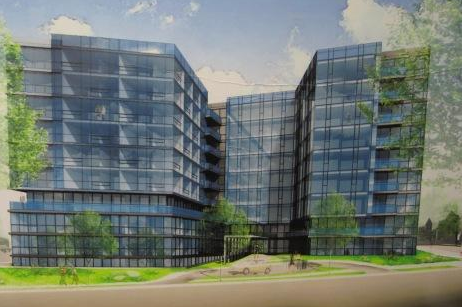 A building planned for Conn. Ave is controversial 22 years after receiving approval. [Cafritz]

BROOKLAND—The massive development near Catholic University is getting ready to start pre-leasing for their hundreds of apartments. We have the floorplans and renderings of what it will look like inside.

CONNECTICUT AVE—A building that received zoning approval twenty-two years ago only just began construction at the end of 2012. Neighbors are irate since they didn't know it was going to happen; we have a rendering of the building plus their list of complaints.

CRAIGSLIST—There was an insane Craigslist ad posted earlier this week, but has since been taken down. We've got the whole thing for anyone who wants to read about a young couple's tale of woe moving across country and why they need a place to live in exchange for work.

MAPS—Curbed is hooking you up with a way to keep those New Year's Resolutions. We've mapped eight condos under $500K that all have access to a gym.

MARYLAND—A hefty price chop took place for this 1930s castle on the water. What was a $10M home is now asking $6M. But it sure is pretty!

ARLINGTON—The new boutique building with fewer than seventy units has just begun hard hat tours. Pre-leasing has already begun, so click over for floorplans and prices, but move-ins will begin in February.

HGTV WIRE—This week was the series premiere of Scoring The Deal—the HGTV show that follows superstar athletes as they look for housing. Since so many of the stars have a DC connection—Clinton Portis, Vernon and Vontae Davis, Greivis Vasquez—Curbed got a chance to talk with the real estate agent who helps them all find a pimped out pad.

CLARENDON—This week we looked at places to live near the Eater 38 member, Liberty Tavern. Clarendon is one of the tightest housing markets around, but we found a few good spots.

THE INTERNET—There are so many real estate search engines out there, but we have a new one that just entered into the DC market. Streeteasy has already made a name for itself in New York and Miami, so naturally DC was the next logical city for them to come to.