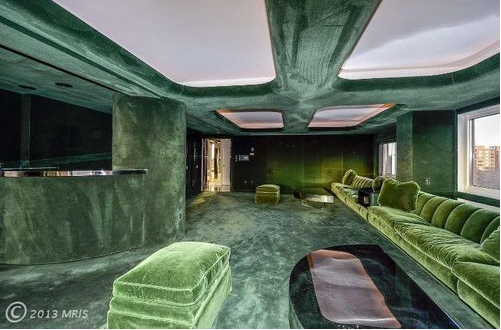 WESLEY HEIGHTS—The wackiest penthouse condo in DC has just come to market with wall-to-wall green velvet in the living room and the bonkers decor just goes on from there. It has its own internal elevator, all white round room, and more.

INAUGURATION—Hotels haven't disappointed with their four-year tradition of creating over-the-top hotel packages and this year they range from $47K to $2.7M. One of them comes with a social media butler, but click over for a full rundown of the perks.

RENT—In this week's edition of Curbed Comparisons we looked at places to rent in the $2,000 range.

CLEVELAND PARK—A new contemporary home with huge backyard has hit the market right next to the Rosedale Conservancy. Designed by Winthrop Faulkner for his own use it somehow achieves a contemporary look without using sharp angles.

MT VERNON—An 11-story building is coming to New York Ave that has an exciting amenity: a vertical car lift to park cars instead of a regular parking lot.

ANACOSTIA—Our Curbed Cup winner for 2012 was Anacostia so naturally we had to find some places to live in the nabe. Check out our map of what we found.

SOUTHWEST—The massive 15-block plan to develop the part of downtown mostly filled with lifeless office buildings was approved by the National Capitol Planning Commission. The so-called Southwest Ecodistrict will take 17 years to complete, they say, but do click over for renderings of what it will look like eventually.

INAUGURATION WIRE—The grand opening of the Inauguration pop-up store was last week and we have some shots of the crowds that came out for the fun.

NORTHWEST—The DC Design House for 2013 has officially hit the market for the hefty price of $14.9M. We have a few exterior pictures and the list of designers who are going to work on each room.

ADAMS MORGAN—There are 19 new boutique condos just finishing up and the prices and floorplans have been released. Though at least five of them are already under contract so get a move on if they interest you.