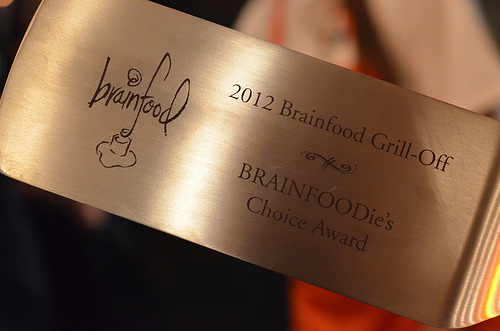 Who steals a trophy that someone else earned? Apparently a thief at Poste Modern Brasserie is brazen enough to do so. Chef Dennis Marron won the People's Choice Award at the annual Brain Food Grill-Off Competition. "It was a Weber spatula, really nice stainless steel and engraved," Marron said. He placed it on one of the shelves housing plates in the restaurant's dining room and it later disappeared.

Marron isn't exactly sure when the spatula went missing. He believes it was gone for awhile before the theft was noticed — by someone from the nonprofit Brainfood who came into the restaurant and wanted to take a picture with the trophy. "It seemed awfully strange to me," said Marron of the theft. "I guess it is a really nice spatula if they're going to use it to grill outside."

The trophy isn't the only thing to recently go missing at Poste. When Marron started at the restaurant more than a year ago, there were 12 bar stools. Now, they're down to seven. "They actually may be in the hotel somewhere, but we've kind of looked everywhere," he said. "We're close to the point of starting to look over video tapes."

If the trophy or stools are returned, Marron said a small reward may be in it for anyone who brings it back. In the meantime, Brainfood has graciously offered to make another trophy for the chef.