John Boswell on 16 Years Spent (at) Off the Record

Share All sharing options for: John Boswell on 16 Years Spent (at) Off the Record 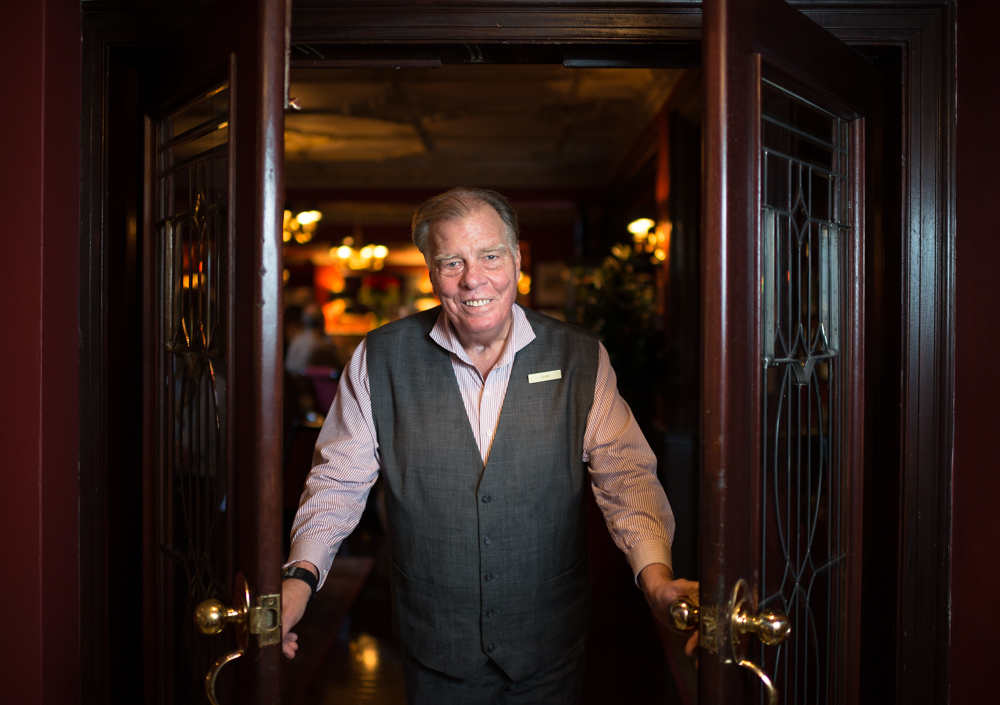 With its proximity to the White House, it's no wonder Off the Record, the basement lounge at the Hay-Adams Hotel, has garnered a reputation as one of DC's classic old-school bars. Over the last sixteen years, bartender John Boswell has seen a clientele he deems "the cream of the crop." Serving up classic cocktails to some of D.C.'s biggest names, from politicos to journalists, artists to musicians. But he's not dropping any names. No one on the Hay-Adams staff ever will. It's Off the Record, after all. And they mean it.

The bar's famous discretion and timeless interior has remained relatively unchanged over the years, giving the patrons a sense of class and familiarity all at once. And while the suede upholstery and political caricatures on the wall are reminiscent of the power bar's historical richness, it's Boswell who makes the underground lounge feel truly untouched by time.

For a special Cocktail Week edition of Lifers, John sat down with Eater to talk about life in the industry, changes to the DC bar scene, and George McGovern. Ok, so one name was dropped.

Have you always been in the service industry?
Yeah, pretty much. I started off when I was in college and I just stayed with it. I made several other attempts at other careers. But I always came back to working in the food world. Working at night gave me the opportunity to pursue other opportunities during the day, like painting and photography. It worked out really well.

Are you from the DC area?
Born five blocks from here.

How did you wind up at the Hay-Adams?
You know, I always liked this little bar and I came in here probably twenty five years ago and said "One day I'm going to work here," and so I just kept checking back, looking to see when there was going to be an opening. The bartender that was here was probably about my age now [laughs] and I said, "Well he's gotta retire soon." Lo and behold, he did. And then I applied for the position and finally got it. I just kept knocking on the door. "You open yet? Position open yet?" Now I've been here sixteen years.

Off the Record is known for the classic cocktails, but as a bartender do you think it's important to stay on top of cocktail trends?
The customer dictates what they would like to drink. I'm the server so they determine the trend.

What's ordered most right now?
Right now I would say it's a race between a martini, Manhattan, and Old Fashioneds. Actually, those have always been the popular three drinks even before the current craze. That seems to be a pretty popular craze at other bars right now. Just so happens to be the classic drinks we've served for years.

What's changed about the Hay-Adams in your time here?
Oh my goodness. So much has changed. Sixteen years ago very rarely did we serve anything in a martini glass, in an up glass. And now I would say 50% of our cocktails are served in one. In that aspect it's changed. And back then, the drinks were not as labor intensive. Very rarely did we have the drinks that required five or six ingredients that we have now a days. Right now the craft cocktail movement is big and strong, or I should say it is among the young people. The older clientele they know exactly what they want, they very rarely deviate between their usual scotch and water, scotch on the rocks, bourbon rocks. They usually don't go for the razzle-
dazzle.

Has the clientele changed as well?
Yes. We have a much younger clientele now.

Have you ever been nervous around some of the more powerful clientele?
No, not after 35 years in the industry. [After] 35 years you get kind of used to it.

What's the best part about working here?
Oh the best part of working here? There are so many great things. It's a nice small intimate bar. You get to know a lot of your regulars. We have the best clientele in the world. We have the smartest, friendliest, and I'm not just saying that because it's my place of employment. It is a real treat to work here, and to learn from them because they're all so smart. And I love just being around them because I learn from them everyday. And over the years, since I've been here so long, I've seen a lot of their children grow up and their children have children. Because of our location we do get a rather interesting clientele, cream of the crop. It's just so much fun just to get to talk to them. I use to sit and talk to Jimmy Carter. Or George McGovern, who was my hero, I was one of the three people who supported him for president. I got to meet him several times in here, which was my dream, you know. Things like that never happen in any other bar. I've been very lucky.

Where do you go to get a drink in DC?
I live at Dupont Circle and I've lived there for 25 years in the same apartment and I used to go to the Childe Harold, but that's not longer there. Now a days, I hate to say it but I don't really go out anymore. If I do go out, I go to Maddy's on Connecticut Avenue, because it's close to my home. Timberlake's and Childe Harold, as everybody knows, those were two famous bars that everybody knew about. All the bartenders from around town went to them for thirty years. But they both closed.

Do you think you'll retire any time soon?
I hope so. Three years, I hope!