Welcome to One Weekend In, where we check in on a restaurants first few days of service. Here, Tim Ma talks about Water & Walls early days. 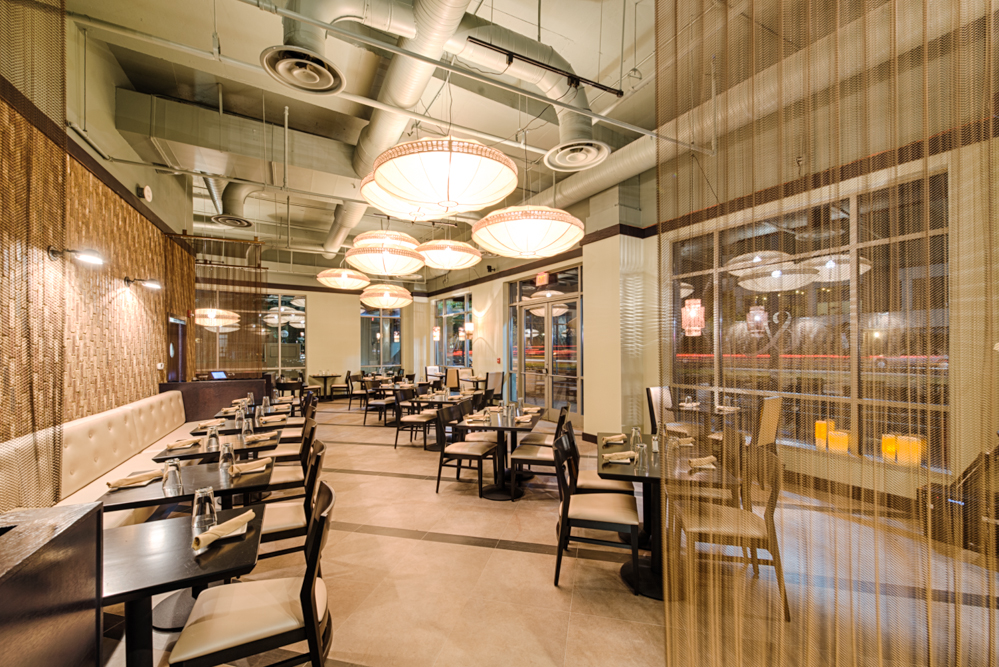 Tim Ma and the team behind Maple Ave. in Vienna already had one restaurant under their belts when Water & Wall opened this weekend in Arlington. That meant for a different experience this time around — but it didn't necessarily mean an easy ride, either. Ma talked with Eater about Water & Wall's first few days, which were plagued by equipment malfunctions, busier than they ever expected, and extremely rewarding overall.

Hey there. So how are you feeling?
I'm a bit tired. I haven't slept at home for the past week. For the first couple nights, we stayed overnight because we were doing construction and it didn't make sense to go home. Then it was like 'Oh shit, we're going to have to be cooking all night.'

Will you be able to go home tonight at least?
No, tomorrow we have a media luncheon so we're prepping for that. And we have a dinner with Cedric [Maupillier of Mintwood Place] tonight benefitting Arcadia. So I'll make it home Tuesday night, and probably Wednesday I'll take the morning off.

So take me back again, when did you officially open the doors?
On Friday we did Friends and Family, and then Saturday we did the grand opening. Last night was just kind of a regular service, which was kind of nice.

So when you opened, did you feel things were pretty much ready, or did you still have last minute construction things to finish or anything like that?
Probably just like everybody else, you're never completely ready. And you know, I think toughest thing was convincing the staff, "Hey, we're ready to open. Regardless of everything, it'll be fine." If we felt completely ready to open, that probably means we should have opened about a week ago. It was a little hectic the first day, but I had basically doubled the staff, and I think half of them at some moments didn't know what to do.

So what do you think the biggest challenge was on opening day?
So I'm not the expediter in the kitchen calling orders. My sous chef does that. I'm on the line. It was myself, my chef from Maple Avenue on the line and the equipment wasn't working.

Oh no. What specifically?
It was a weird thing. The gas pressure coming into the building was too high for the equipment. It was just coming in full blast, and that meant the fryers weren't working correctly. At 5 o'clock, we had the equipment guys in here fiddling with the equipment and we had to work around them to begin prepping things out. Every time the fryers turned on, it shook the whole building. It was a little scary. Then on Saturday, service got hit really hard. The core cooking was being done by me and the chef from Maple Ave., so we knew what was going on, but I think it was harder for the newer staff to get ahold of that.

So what were the crowds like on each of the days?
Well, since Friday was Friends and Family, everyone there was either someone we knew, people who helped us building this place, and our loyal Maple Ave customers. Saturday night was about half friends and family, half reservations. We were fully booked out on Saturday night. At around 2, I was saying there was no way we'd have enough food to make it through the entire night. So we had to turn away people at the bar, walk-ins. So that was a great thing to be booked out the first night, but it was a tough thing just because we had no idea how much volume it would be. It's a much bigger restaurant than Maple Ave. Sunday was just very chill. It turned out to be a lot of neighborhood people, my family.

Did you see any industry people during opening weekend?
Yes, Katsuya [Fukushima, of Daikaya] came in.

Tell me about the opening menu. Were any dishes particularly big hits the first weekend?
So maybe 30-40 percent of the menu is from Maple Ave. The rest was designed by myself, my chef from Maple Ave. and my sous chef. So I was kind of more interested in what they were doing, not so much what I was doing. I think the dish that hit it off the best was a Burmese Bouillabaisse from my chef Nyi Nyi [Myint]. He takes all the seafood we have in-house — scallop, shrimp, mussels, squid — and makes a seafood stew that's tomato-based, but he bases it on Asian-style ingredients and herbs, like lemongrass, Thai chili, fish sauce. It's such a nice, homey dish. It's the style of food I like to eat.

How did the opening compare to Maple Ave.'s opening?
Two different worlds. We were talking about it last night. At Maple Ave., it was so slow when we started. It's only been three days, and I don't know what the week would entail, but last time we just opened the doors, and were like, 'People, please come.' I think we have more of a marketing push with this, and more of a reputation. We have more experience - before we literally had no idea what we're doing, learning everything as we went. Here, we have experience, we're bringing people with experience. I wouldn't say it was better, just different. There's a lot more of a feeling of control

Do you think your recent #1 ranking in Northern Virginia Magazine for Maple Ave. was part of the reason it was so slammed opening weekend?
I don't know. But that made our week stressful, too. This is coming out the same weekend we're opening a new restaurant. So for one thing, Maple Ave. was busier, and Maple Ave. was already kind of stretched to its limits given I took about half the staff with me to open Water & Wall. The night before opening, I went over to Maple Ave. and was essentially grocery shopping, taking all of their stuff. They weren't particularly happy...so it was a little stressful, but a good kind of stress. How often can you say you're #1 at anything? So we're kind of enjoying it right now and not letting it get to us too much. Otherwise, all the work it took to get there wouldn't be worth it.

Have you had the chance to celebrate the opening at all?
I don't think we've quite celebrated. There's been the normal after-shift drinking. We had a pitcher of beer, talked about what was going on. But after Friday night we also had to rest. We literally worked a 40 hour work week in two days. And everyone was tired, not just me.

Any goals now that the first weekend is done?
To stay in business? You just think about how much money you spend to get something open, and the important thing now for us is to settle in and make it the best we can. Maple Ave. is so stable, like a machine now, but here everything is new. Even cooking shrimp and grits here is different on different equipment. We really wnat to start tweaking the menu, and to figure out what Arlington wants to eat, because what Vienna wants to eat isn't always what Arlington wants to eat. So we've been getting everybody's feedback as much as we can. That's what's going to help you stay in business. The most important thing to us is food and service — not parking, not atmosphere. Now we quote unquote have a bit more atmosphere here. We have to make sure that's not what's tricking them into trying the food.
· All Previous Water & Wall Coverage [-EDC-]