Hogo and Its Rum Selection Age Well in DC (and Peru)

Share All sharing options for: Hogo and Its Rum Selection Age Well in DC (and Peru) 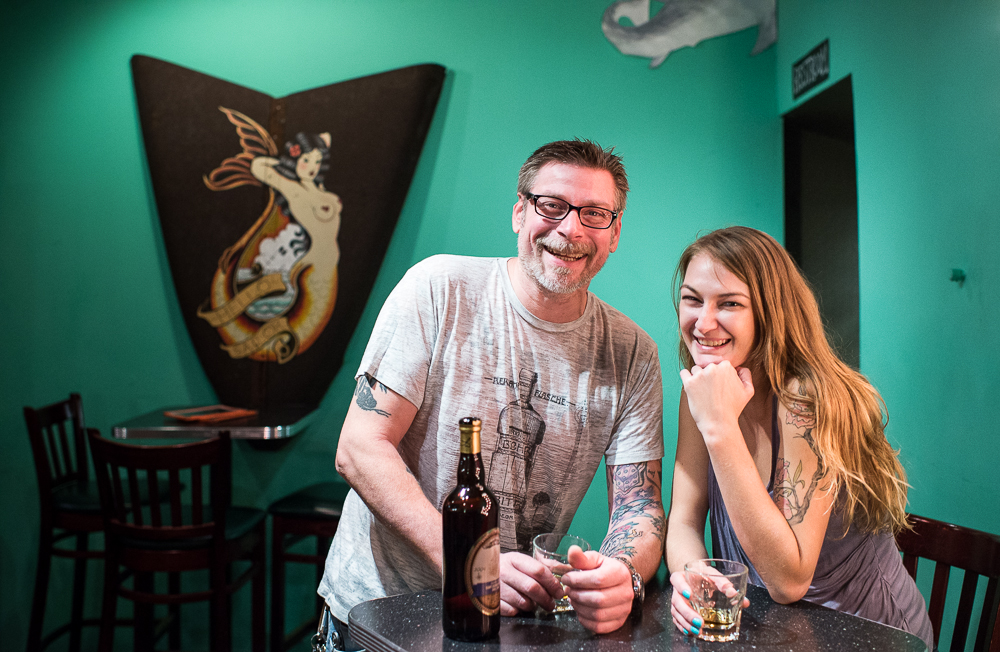 The Brown family loves their cocktails. Tom Brown, older brother to Mockingbird Hill and Eat the Rich's Derek Brown, wanted to give the city the rum selection and the tiki bar it needed. Partnering with Room 11's Paul Ruppert, this team created Hogo, a tiki neuvo bar that's fun and does justice to drinks and food that are from el sur de la frontera. And the concept has been a hit. So much so, that younger Brown brother Nick has taken the Hogo concept and ran with it — all the way to San Bartolo, Peru. So if the idea of drinking rum in DC during its cold winter is less than ideal, remember there's an option to do the same thing oceanside just outside of Lima, Peru.

To give us the background on all things tiki-related, Brown and Hogo's head bartender Dani Paulson from New York Avenue Beach Bar and The Passenger sat down for a few rounds of rum, some Latin food, and talked about the pleasures of working with rum. Cheers to that!

So why open a bar focusing on rum?
Tom Brown: I like rum. Rum is one of those spirits with so much diversity. Most people think of rum as either Bacardi or Captain Morgan. And those are two pretty good rums, but there is a world of rums beyond those. You can have rum that stretches to vodka-like and you can have rum that's like scotch and everything in between. There are so many flavors that you can work with. It's dependent on the terroir and where it's from. The rum from Trinidad is going to taste different than the rum from Jamaica. And it's fun to explore all those differences.

What's the tiki neuvo concept?
Dani Paulson: The original tiki movement was a lot more rum based. Rum was cheap. Rum was accessible. And all this exposure with juices and flavors and had only been heard about in posters and stories, and suddenly with the soldiers returning from World War 2, something that was inaccessible is now accessible with the new technology. By taking it to the tiki neuvo concept, with the Caribbean and Central and South American influence and incorporating the spirits that we have opens up so many options. Suddenly a classic recipe that's been played with for years and years, throw in a different spirit and now you have a new cocktail.

How did Hogo get its name?
TB: It comes from the Creole word for haut gout, which is French for high taste. So it's sort of a bastardization. And in Jamaica they use that phrase for rum houses.

So when you're off the clock, what rum do you reach for?
TB: This is what I like to pour for myself. It's a 2004 Hamilton Saint Lucian Pot Still. It's nine years old and cask-strength so it's pretty fiery. It's pretty difficult to get anywhere but here since I've been buying it up. We put this in our version of a mai tai. It's almost whiskey-like and would compare it to a nice cask-strength bourbon.
DP: Yeah, that rum has a lot of earthy notes. And it's a characteristic of those types of rums. I do like the seven year Fleur de Cana. It's a good solid rum. But it is one of those things where we have so many spirits behind the bar, so I try to not grab the same bottle everyday because I need to know what I'm talking about. But I do like making half and half of Cruzan Black Strap with Campari. It's a great nightcap.

How many rums do you guys have in Hogo?
DP: We do a steady rotation of 80-90 rums. So there's always something new for customers to try.

And what about other spirits? What else is at Hogo?
DP: We have about 60-70 other spirits, like mescals, cachaca, and tequila.
TB: Yeah, we have a lot of tequila that we can't even put on the shelf because we don't have room up there. And when we came up with the concept of tiki neuvo, we didn't want to just focus on rums. Yes, the bulk of what we have is rum, but we have a large selection of spirits from Central and South America. We have a great tequila selection, piscos, and mescals. We have some really fun stuff.

How has the Vigilante Coffee pop-up changed the space at Hogo?
TB: It's been great having the pop-up here. Chris Vigilante approached me with the idea, and we went with it. It gives the space energy during the day before the rum drinkers start arriving.

Speaking of rum drinkers, what kinds of people come to Hogo?
DP: We get a lot of people from the neighborhood. Some come over from the Passenger and are looking for a different vibe. It's funny because you wouldn't think there would be such a niche for rum, but there is. We get a fair amount tiki lovers and rum aficionados who come in here and start spouting off facts that I didn't even know. You learn something new everyday.

How do you teach people more about the world of rum?
TB: We don't have any formal classes or anything, but we offer flights of rum that expose people to different kinds of rum. We have one flight with rums from Guyana so you can see how age affects it. Then when have one of rums from all over the Caribbean. And then we have a history of rum flight, that's one of my favorites. It's also the most expensive ($100) because of this little jewel right here: Black Tot. That rum was originally destined to be consumed by the British Navy back when they were still doing rum rations. Unfortunately, they discontinued that practice in 1970. There's a very little bit of the leftover rum. So it's actually like a window back in time.

What sorts of foods are there for your patrons?
DP: Executive chef Javier Duran and chef de cuisine David Flores create some awesome dishes that go well with rum.
TB: We like to have foods that are inspired by street foods you'd find in South America. We have Mexican corn and pupusas. We have a dish Javier came up with after visiting an island off of Belize.

What are you guys doing for Hogo's one year anniversary?
TB: We'll be having an anniversary party on December 19 with drink specials and someone spinning vinyl.
DP: All people have to do is show up and have a great time. We're really excited about it.

And what's next for Hogo?
DP: We're going to continue to play with the menu. We're actually on our third rotation of the cocktail menu. Some of the recipes on our first menu were classics, and we tweaked those to give us some new recipes. So everything on the menu is a now a proprietary house recipe. It's awesome that we now have this awesome repertoire of cocktail recipes.
· All Previous Coverage of Hogo [-EDC-]
· All Previous Editions of One Year In [-EDC-]