Ashok Bajaj on 25 Years of Stellar, Politician-Friendly Service at the Bombay Club

Share All sharing options for: Ashok Bajaj on 25 Years of Stellar, Politician-Friendly Service at the Bombay Club

When it opened 25 years ago, Bombay Club in some ways was a risky venture. Not only were many D.C. diners wary of Indian food — they had never been exposed to it in a formal setting. Enter Bombay Club, which remains one of D.C.'s most iconic restaurants to this day. In the meantime, its owner Ashok Bajaj didn't stop there. After Bombay Club found its footing, he went on to establish eight more restaurants. Bajaj spoke with Eater about his first. 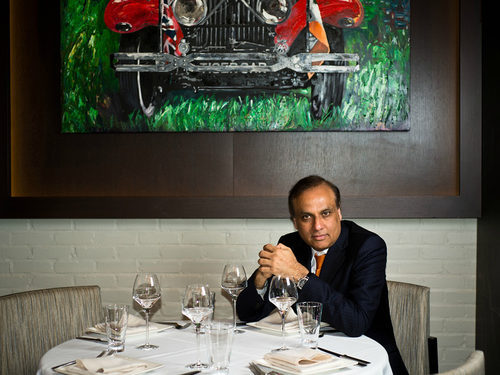 So did you ever think this place would be here for 25 years, or did it feel like more of a gamble at the time given how unusual the concept was for DC?
Oh absolutely. Before one or two years went by, I was tentative. I was new to this country. But once I figured out we were going to be ok — that there's nothing wrong with the restaurant, it's that Congress goes away. In London, you know, when people go away during the summer months, you have tons of tourists. So yeah, absolutely, after that I was very confident because I saw the progress, how people were beginning to like the food. And of course, President Clinton came to the restaurant numerous times. That obviously had an impact on the restaurant as well. President Bush came in, Nelson Mandela was in the restaurant. So you know, after that, I knew we were on the right track with the service, the ambiance. It's been a lot of fun. It's been a wonderful 25 years.

I partly asked the question because I knew Indian food wasn't as established here at that time. Talk a little about that.
You know, with due respect to everybody was here, Indian food was not presented well. We really brought in the regional cuisine to the city. It was something that had never been done before, I don't think anywhere in the U.S., really, to the best of my knowledge. And that for me, introducing the cuisine, it was a bit of a challenge. But I think once people came in and they had it once, I think 95 percent of the time, they came back in. I remember I used to go over to the art galleries, handing out cards. "Come on over here — it's not so spicy!"

How did you end up with the space? Were you aiming to be near the White House?
I wanted to be close to the Old Executive Building, the IMF, the World Bank, the White House because in my mind, everyone was dying to be on K Street. I didn't want to be there. There used to be all these places — Mr. K's, Bombay Palace. I wanted to be off the main street. I wanted people to find me. I also wanted to be close to the international community, people who travel to India and that part of the world, who would appreciate it.

How much does today's menu look like the opening menu?
We brought a lot of dishes back for next month. There's one dish that's still there, the Tandoori Salmon. We always kept that on the menu; it's very popular. Other dishes we're bringing back — the classic dishes like lamb rogan josh, sometimes we'd take it off, put it back on.

Has there been a lot of chef turnover over the years?
I have been blessed in that way. My chef has been here for eight years. My chef before that was here 7-8 years, another was here 6-7 years.

How did the opening of Rasika impact Bombay Club, both originally and today? Did it draw more attention to it, or did it steal the spotlight?
It had a positive impact on the Bombay Club. Bombay Club is sort of this very elegant restaurant, in a good sense. I think the younger generation didn't think of going to Bombay Club — it was their parents' restaurant. And a lot of younger people moved into the city over the last few years. When Rasika opened up, and they couldn't get into Rasika, they would say, "Oh, I want Indian food, I can go to Bombay Club." And then this reporter Missy Frederick started talking about Bombay Club...

[Laughs]. Would it surprise the Ashok Bajaj of 25 years ago that you now have everything from small plates to Italian food under your restaurant company?
Well, one of the things I love about what's going on in D.C. is that a lot of young people are coming in. Everything's changed. We've kept up with the trends, and I create trends. It's a combination of both. When we opened Bibiana I just wanted to be a little different, wanted to have so fun, to have Italian food, but not be too serious. That's always the goal.

I know when we spoke five years ago, serving Bill Clinton and Nelson Mandela were big highlights for you. Since then, has anyone else come in that had the same sort of impact on you?
I mean, in the last five years, Mrs. Clinton has come in several times. One time she came in without a reservation and we didn't have a table. We had to make them wait! That still lingers in my mind. But so many celebrities have gone through this room. The Secretary of Energy comes in three times a week. John Kerry has been in with his wife — you know, they eat vegetarian most of the time. I think all the secretaries of state [during the restaurant's tenure] have eaten here. 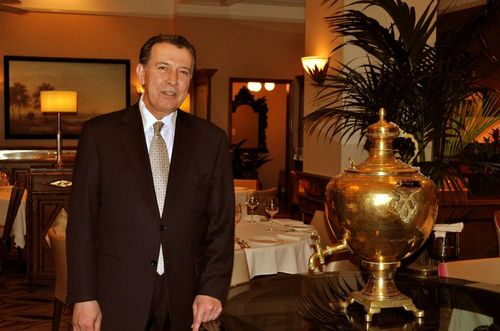 Are you happy with how the restaurant is viewed today?
With Bombay Club being older, in some ways it was kind of ignored [by the media] but it never really had an impact on the restaurant. My manager, he's been here for 22 years in the same job. You interviewed him. And I have a lot of people in the kitchen and the front of the house who have been here many, many years. When Phyllis [Richman] was at the Post, I don't think I ever missed a year in her 50 favorites. So when Tom took over, he obviously had to make his own mark. He has put me in [his guide] several times, and gave us three stars last year. It's kind of like the place is being discovered again. It's never slipped its standards, food, service or ambiance-wise. It's such a dignified and refined place.

What are you doing to mark the anniversary? You mentioned you're bringing back some menu items.
Yes, and some classic cocktails from over the years. We'll bring back a lot of classic dishes towards the month of January and probably keep it going throughout the year. We're also doing a two courses for $25 lunch. And we're pouring champagne during the whole month of January for anyone who dines here, barring Restaurant Week. It's been a blessing, having succeeded for 25 years. I also want to do something to support a charity, do some good, but haven't [finalized that].

What's next for Bombay Club?
Just keeping things fresh, basically. We renovated it about three years ago, and I'm happy with it. I'm so grateful we've had the support of the public and the critics.
· All Previous Bombay Club Coverage [-EDC-]