As is the tradition at Eater, our closeout of the year is a survey of friends, industry types, bloggers, and readers. This year, we asked the group eight questions; all will be answered by the time we turn off the lights at the end of the year. First up, experts tell us what their Restaurant Standbys were this year. Responses are related in no particular order; all are cut and pasted herein. 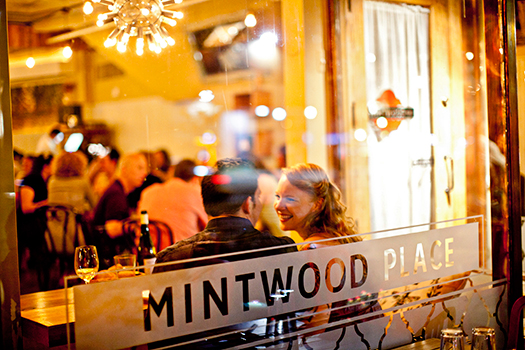 Nevin Martell, freelance food writer (@NevinMartell): Mike Isabella's G instantly became my go-to for a serious sandwich fix and I find myself there at least once a week. The chicken parm accented with Thai basil and spiced baby goat are phenomenal, but it's the roasted cauliflower 'wich that has earned the most special place in my heart.

Jenna Golden, EatMore DrinkMore: I am a total regular at Posto on 14th Street. It's a block from my apartment, and it always hits the spot with great pastas and pizzas.

Tim Carman, Washington Post food writer and "The $20 Diner" columnist: As always, when I give myself a day off from the $20 Diner beat, I like to visit The Classics in Silver Spring, where owners Nick Lopata and Elliott Rattley have the friendliest, most relaxed bar in the entire metro area.

Sara Pepitone, food and travel writer: Mintwood Place, for any given night off and with anyone ever visiting, for extremely well executed food — as casual as you wish but never simple, in a fantastic setting, with great service.

Prince of Petworth Dan Silverman, founder of PoPville: My restaurant standby for 2013 was the same as 2012 — the incredibly delicious Pho Viet in north Columbia Heights. Though if I want a drink with my meal I've been consistently happy with Chez Billy in Petworth.

Stefanie Gans, Northern Virginia Magazine dining editor and food critic: I don't get there often, but anytime I'm traveling south on 95 I must stop at either the Fredericksburg or Glen Allen location of Peter Chang. I've even eaten his bamboo fish in the car on the way to Durham. And I also ate his bamboo fish in-between two dinners planned in Stafford County just to show Jessica Sidman the beauty of Chang.

Jessica Sidman, Young and Hungry columnist and food editor, Washington City Paper: Rarely do I get to be a regular since my job requires me to try out new bars and restaurants. But if I don't have anything I need to check out, my go-to neighborhood spot is often A&D. (I like to order the A&D martini with Green Hat gin, Sloop Betty vodka, and a dirty juice blend.) Also: WTF (Woodward Takeout Food) for lunch. It's right near City Paper's office, and I probably go there at least once a week. I could throw a dart at the menu and be happy with whatever it landed on, but I especially love the grilled cheese, merguez sausage, Chick Chick, and provencal veggie sandwiches.

Michael Martinez, producer, The Kojo Nnamdi Show and The Politics Hour, WAMU 88.5: I live around the corner from 2 Amys — so it serves as my neighborhood standby, my easiest solution for out-of-town guest situations and my special occasion kind of place. I feel very strongly about pizza, and I feel very strongly about everything they do there. Now that WAMU, 88.5 has moved to the Van Ness neighborhood, you can pretty much find someone from the station at Pho 14 every day around lunch hour. Definitely a perk of the new office neighborhood.

Eun Yang, NBC4 anchor and Emmy award-winning host of Foodies DC.
We are regulars at 2 Amys. I go with and without the kids. The pizza is the best in the city, but I love all the small plates too. Even my kids ask for the fava bean crostini.
And I'm lucky that I live close to Mintwood Place. Cedric never disappoints.

Warren Rojas, Heard on the Hill: Based on its strategic placement between my office and the Capitol — and, of course, my penchant for hand-held eats (beef patties!) — I'd have to say that the Sunrise Catering stand hidden in the bowels of Union Station was where I most frequently sought refuge at lunchtime.

Jennifer Nycz-Conner, editor, Washington Business Journal: Dogfish Head. Because I have kids. That's what Arlingtonians with kids do. For biz lunches and dinners, I go with Café Milano.

Tom Sietsema, food critic, The Washington Post: Bombay Club and Buck's Fishing & Camping. If I wasn't a hired mouth, I would make both those mature restaurants more of a habit.

Mary Kong-Devito, editor, Girl Meets Food: Kababji Grill. I was very sad to see it close, especially that night I showed up with an intense craving. I threw a minor tantrum. It's unsure if they'll open again, and I'm getting twitchy.

Michael Birchenall, Editor and Publisher, FoodService Monthly: Super casual for me … but I couldn't get enough of Red Apron Butchery in Union Market … the Porkstrami sits at the top of the menu … never made it to #2 … it's Porkstrami every time.
· All Previous Year in Eater Coverage [-EDC-]