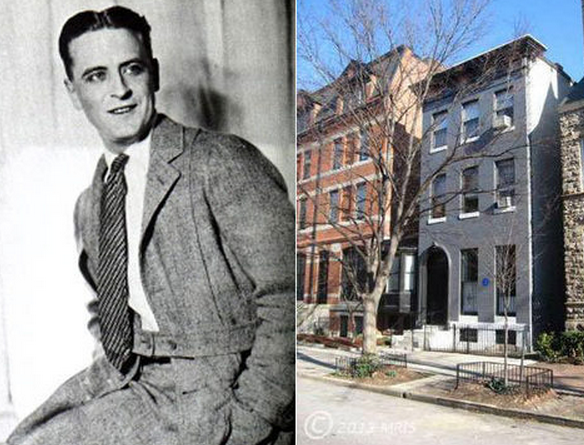 F. Scott Fitzgerald's home in Baltimore is for sale.

BALTIMORE—F. Scott Fitzgerald's home in Bolton Hill has gone on the market. He lived there while two of his books were published as well as a number of essays. We have the pictures of the 100-year old home with many of the original details. One new addition is the blue plaque on the wall citing Fitzgerald's history there.

NORTHWEST—Not far from Battery Kemble Park is the newest most expensive home on the market for DC. It's a $19.5M home with ties to the DuPont fortune.

RENTALS—This week's Curbed Comparisons peeked inside rentals for Whales and prices started at $8,000.

AGENTS—We put together a starter kit of the crucial accoutrements every real estate agents needs when they're working with a Whale. We also chatted with the agent from the HGTV show Scoring The Deal about what it is like to find homes for professional athletes.

DOWNTOWN—City Center DC only opened up condo sales a month ago but already the penthouse has sold for just under its ask. Plus 40% of one of their buildings are under contract.

SALES—There were some expensive sales during the month of January, ranging from $5-$7M. We've got the deets.

RACKED DC—Retail news is ramping up. There's a new Billy Reid, ZILLI, J. Crew expansion and more to talk about.

ATLAS DISTRICT—A real estate agent got poetic with their new listing—a million dollar rowhouse near H Street—and put together a video with such romantic music you just gotta smile.

WHALE TALES—We had a few stories come to our tipline about what it is like to work with clients at the tippy top of the market. Click over for a high-maintenance homeowner, a real estate agent who went above and beyond, and a local sports-owning family obsessed with stain color.

MCLEAN—Former Secretary of State Alexander Haig lived on McLean's Gold Coast near Middle Eastern royalty and Ted Kennedy's old house. His estate is selling his spacious colonial for just under $6M. Do check out the master bedroom that runs the length of the home.

BAR CRAWL LIVING—These past two weeks we've mapped where to live near Sign of the Whale and Coastal Flats at Tysons.