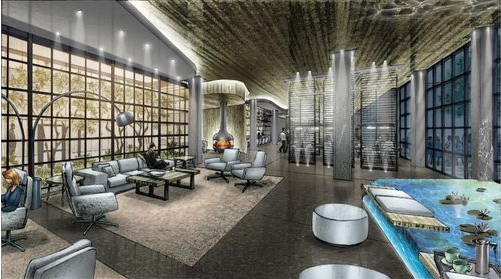 UNION STATION—There's a 377-apartment building coming to the plot next to Union Station and it will have the city's second pet spa for a residential building. Other amenities include an eco-pond, rooftop garden, and outdoor dog walk. We have a few renderings to gander at.

DC—The dating app called Let's Date passed on some interesting data about the dating preferences of DC singles. Apparently we really like to drink and women don't actually like the sensitive type.

ADAMS MORGAN—The small space trend has reached new heights (or is it lows?). Eight new apartments will be built without windows, but each will have a skylight so the inhabitants can remember what the sun looks like.

GEORGETOWN—How about a few pictures of Cole Porter's chairs from his city apartment? The new issue of Veranda looks at a home with those pieces and more luscious decor. We have a few pictures.

VIDEO—The recent Portlandia episode parodied a guy that makes wood furniture and it just might have been inspired by a DC furniture maker. Do check out the video.

NOMA—National Public Radio is moving their headquarters to NoMa and the renderings show a modern eco-friendly building. It should be ready by April and once they're settled they'll open it up to the public for tours.

MAPS—Since it was the week for some lovin' we put together a map of homes that have hottubs and saunas—all of them have room for two. Or more.

EMBASSY ROW—There's a beautiful house for sale that may have been a former embassy, but the backstory is mysterious. But the pictures look great.

BROKERBABBLE—This week we decoded a common word that shows up in February house listings: romantic. Except, in this case it is an exaggeration.

SHAW—The semi-new pub Cause that raises money for charity is in a hot neighborhood. We've found ten choice properties for people who want to live in walking distance of the new watering hole.