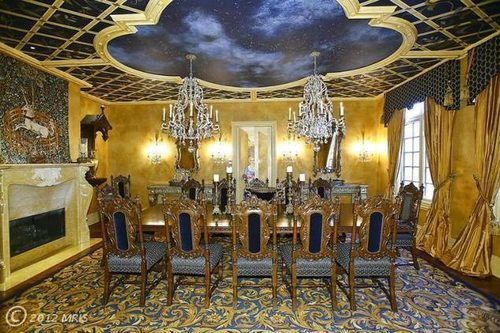 BALTIMORE—The Super Bowl went the Ravens' way, but player Ray Rice is still hoping for luck on his town house that he can't sell. He just lowered the price on the pad that we have a few pictures of in case you want to own the place where Ray Rice lived.

RENT—This week in Curbed Comparisons we looked at what $1,000 per month can rent you around the District.

VIDEO INTERLUDE—A group house filled with artists decided to film their lives during 2010 and now ten webisodes are available for anyone who wants to catch the drama, the good times, and the philosophical conversations of the people who star in the show. We have the trailer to give you a taste of what's in store.

CONN AVE—The many neighbors opposed to the tall glassy building that Cafritz Developers want to build in Chevy Chase have a new website which lays out their concerns and has a petition they would like people to sign.

NORTHWEST—Former Congressman Stuckey has relisted his impressive house that has an even more impressive lineage of owners. Lots of politicos have passed through the doors of this multi-million dollar home.

MASS. AVE HEIGHTS—Any mid-century modern lovers should peruse these listings photos of a home built in 1950 that has every MCM design feature you can think of.

LUXURY HOMES—Spring selling season is getting close so the luxury mansions that have been sitting for a while are lowering their prices. We've mapped twelve high-end homes that have just dropped the price ax on their asks.

14TH ST—The very popular condo building called Northern Exchange has just released their penthouse units for sale. There's an open house this weekend and contract appointments start on Monday. If the past few open houses are any indication, all six units will be gone by noon on Monday.

ONLINE—There's a new rental search engine that just opened up shop for the DC market. Rentenna has a few unique features including a secret algorithm that ranks buildings based on how likely someone would want to live there.

ARLINGTON—The youngest Bush son, Marvin, just upgraded his luxury condo at Turnberry Tower for one that is even more luxurious. It comes with a private elevator and cost $3.8M.

DUPONT/LOGAN—There's a studio on the market for $236K that some would say is in Dupont. Some would say not quite. You decide!

POTOMAC, MD—Crazy decor alert. Words don't do justice to all this wackiness. The few surfaces not covered in gold still have something gaudy to catch your eye.

OLD TOWN—This week for Bar Crawl Living we looked at places to live near the Hank's Oyster Bar outpost in Virginia. Some of the homes date back to the 1700s.