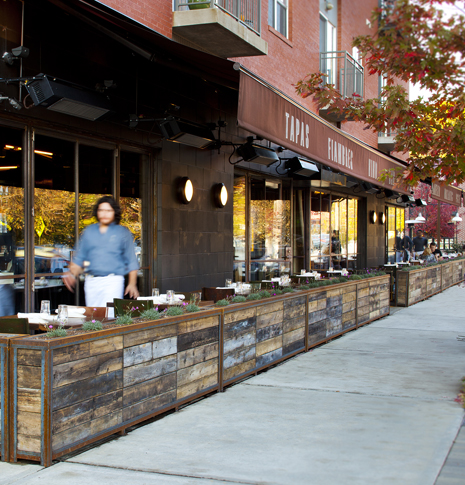 1) Adams Morgan: The owner of Mediterranean Spot will open up a second location at 2421 18th St., NW, PoPville reports. It will have a similar menu to the original restaurant, located at 15th and U. An opening could come in the next several weeks. [PLYWOOD]

2) Logan Circle: Finally some movement on the long-awaited Barcelona Wine Bar. WBJ spots a building permit for the restaurant. A spokeswoman for the restaurant declined to provide any further details to Eater. The restaurant will be located at 1622 14th St. NW. [PLYWOOD]

3) Logan Circle: Here's some movement on the upcoming Black Whiskey. PoPville reports the restaurant has applied for its liquor license. Black Whiskey is a gastropub from the Kushi team. [PLYWOOD]

4) Logan Circle: Gasp! A chain in Logan Circle. Much to the dismay of several folks on Twitter, Young & Hungry reports Chipotle will open a restaurant at 1508 14th St. NW, sometime later this year. [PRE-PLYWOOD]

5) Penn Quarter: The Shake Shack that is taking over the former Spy City Cafe location is aiming for a summer opening, according to PoPville. [PLYWOOD]

6) Northeast DC: Here's a double dose of news from Carolina Kitchen's Lance London. WBJ notes that part of his Rhode Island Row restaurant will include CK Burger, a burger joint. London has also purchased a building at 1309 H St. NE, but he won't say what's going to go there. [PRE-PLYWOOD]