Share All sharing options for: Sixth Engine on Tough Critics, Serving the Neighborhood 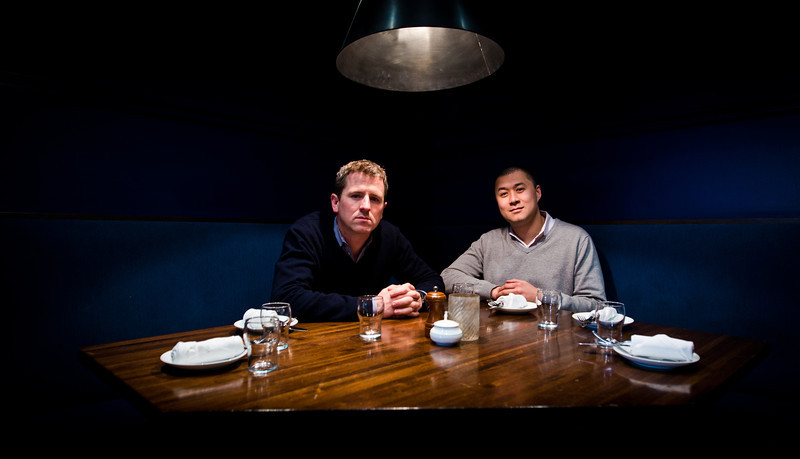 When Sixth Engine opened a year ago in the Mount Vernon Square neighborhood, the business was one of two restaurants on the eastern edge of the neighborhood. The other, Buddha Bar, closed three months into Sixth Engine's run. Many considered Sixth Engine's location to be too far off the beaten path, and that ended up being part of the challenge and the appeal, Sixth Engine partner Jeremy Carman said.

Carman and partner Gavin Coleman hail from across town. The guys along with a handful of partners opened Town Hall in Glover Park. And, Coleman's family runs The Dubliner on Capitol Hill. According to Coleman, their decision to open Sixth Engine came after the partners saw two opportunities: a chance to renovate a historic firehouse — one of DC's oldest — and an opportunity to build a neighborhood bar in an area otherwise missing one. Here, the partners talk about how regulars and industry friends influence business decisions, the surprise success of the bar business, and responding to tough critics.

Your background and experience is at Dubliner and Town Hall. When you spoke to Eater last year, you described Sixth Engine as more of a restaurant than a bar. Is that still true? Is the focus still on the food more so than the bar?
Gavin Coleman: We've learned over the last year that the focus is about the neighborhood, and what's happened with our food is that over the last year we've really become a neighborhood spot. You see it in our menu now, as compared to when we opened — it's the same with the bar. We didn't anticipate our bar and beverage program being such a driver of our business, and we're proud of it. Now, it's a huge part our business.
Jeremy Carman: I think that a part of what makes this building special is that it can be a happy hour spot, it has the energy of a bar, but you can also come here and feel like it's dinner and a date, so we offer many different experiences.

There are multiple partners involved in this restaurant; what's that dynamic like?
G: The dynamic has been great in that Jeremy and Paul [Madrid] are full-time here, and I also spend a lot of time here. But, getting customers to understand our concept was a little challenging at first. Having been open for a year now, I think people know what Sixth Engine is. It was confusing at first because my background was Dubliner, and then we opened Town Hall -- two totally different places. We've never opened a place like this before, and people really didn't know what to expect . . . Now people recognize our bar program and the food, and our identity is a bit more clear.
J: The pros are that we have resources and other businesses, and a bit of a built-in clientele. But, I think some people expected it to be The Dubliner, or expected it to be Town Hall, and it's really its own place.

The location is kind of unique. What have been the advantages and drawbacks to opening in a new neighborhood like Mount Vernon Square?
G: When we decided to take this space, we fell in love with two things: the building, which speaks for itself in its history, and the other thing was that this was a new neighborhood. Town Hall is a neighborhood spot, the Dubliner started off as a neighborhood spot, we like to think of our spaces as a place for regulars. That's what we liked about this area. It was a little difficult at first, when we were one of two places, and then Buddha Bar closed down. We're not going to lose sight of what we learned in the last year of catering to the neighborhood, that's always been our focus and a main reason for our success.

So give me an example of how you catered to the neighborhood.
J: Coming in here and there not being another neighborhood spot, things like our Christmas tree sale, which took place on our patio in December, helped to raise a lot of money for the DC Firefighters Burn Foundation. It also gave us a goal to build a sense of community. You can't just do that overnight, but we are trying to build a mentality that this is a neighborhood even if it's still growing.
G: I'm from DC and I take offense that people say DC is a transient city, almost personally. DC is a cool city, it's a place people live in for a long time, and bars like this, neighborhoods like this, make it happen.

Now that the first year is over, what are some of the new ideas that you are exploring for year two?
G: Given how the year has gone, we are continuing on a path of what we are doing with our bar program. I don't think that people think of us as a craft cocktail place, but we have a pretty robust program. When people come here for the first time and try it, they are a little surprised . . . It's been a consistent thing that people love.
J: We have had four bartenders that have been here since we opened, and they've taken it and run with it. We are happy to let them do it. There's a lot of stability behind the bar. And, as far as the food goes, the menu has become more approachable too.

You guys got a few tough food reviews when you first opened. How did you respond to that criticism?
G: Well, we got a good review from Tom Sietsema. The Washingtonian review was a little tough on us. But look, I grew up in the bar business, and we've been in the restaurant industry for a while. We can take tough reviews, and in fact tough reviews frankly have helped us get to where we are now.
J: Also, the feedback that we continue to get from the neighborhood is what we take to heart, and it's helped us build and change our menu. One review doesn't change anything. Since we've arranged our menu to what the neighborhood wants, there's been a big uptick in our dining.

So what does the neighborhood want in-terms of food and drink? What do you order when you come in here?
G: We can't have a big menu, but people come here so often that we rotate favorites in and out. There was a sandwich that was wildly popular when we first opened. We are going to do a two to three week reintroduction of that sandwich, our "MacRib" sandwich. It's almost like a bit of a tongue-in-cheek play on the fast food version. But when I come here, I want our bistro filet with fries or an arugula salad.
J: There's very quick beer menu change out too. There's constantly a pint of something new that I'm looking forward to . . . right now, we just put 3 Star Brewery's Urban Farmhouse on-tap, a peppercorn saison, and we just carried their Southern Bell. We basically try to change out the taps with the seasons.

What can we expect from you guys in the year ahead? Anything specific in mind?
G: To be honest, we are not looking to do another place. We don't want to rush away from a place that we love and put so much effort into. Sixth Engine is our priority right now. After a year, we have it going in a good direction, and the patio is just about to open. Once that gets going we'll see continued growth. Also, when the patio opens, it allows us do private events upstairs. That's been a big area of growth for us. The building besides its history really lends itself to anything you want to do with it.
—Tim Ebner
· All Previous Sixth Engine Coverage [-EDC-]