Welcome to On The House, a guest column written by a member of DC's restaurant industry, sharing behind the scenes info, insider knowledge and more. Here, Mandu co-owner Danny Lee offers his own personal guide to Annandale, the region's Little Korea. 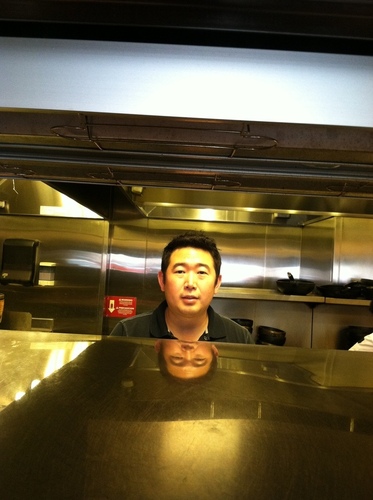 Danny Lee may spend the bulk of his time at one of two locations of Mandu, D.C.'s neighborhood Korean restaurant, which Lee runs with his mother, Chef Yesoon Lee. But the D.C. native also knows just where to go in Annandale for everything from codfish stew to black goat. Lee avoided some of the more popular, go-to spots, like Honey Pig and BonChon Chicken, in the hopes of getting visitors to explore the area a bit further. Here's Lee's insider guide on where to head for which dish. In his own words:

This is by far my favorite place to eat in Annandale. It is a tiny, hole-in-the-wall establishment, specializing in stews and grilled fish. My go-to dishes are the Daegoo Maewuntang (spicy codfish stew in a hot pot), Chung Guk Jang (fermented soybean paste soup), and the Godeonguh Gui (grilled mackerel). It's the only place in Annandale where you will see Koreans waiting in line to get in.

This place is known to specialize in a variety of black goat dishes, as well as their Samgye Tang (whole cornish hen stew, stuffed with ginseng, garlic, jujubes, and sweet rice). Their Samgye Tang is amazing; it comes out in a hot pot and is perfect for a cold and rainy day or when you have a cold. The soup is what most Korean mothers actually cook for their family when they are sick. Their Bajirak Kalguksoo is delicious as well. It's a soup with fresh, chewy wide noodles with clams. There's a spicy chili paste that you add in to give the soup a kick and also more depth. The starch from the noodles thickens the broth as you eat.

This is a Korean Chinese restaurant. Korean Chinese is a specific type of food that typically involved three dishes, all of which are featured at this restaurant and are absolutely delicious. Ja Jang Myung uses thick, handmade wheat noodles, and consists of a thick black bean sauce with cubed meat, potatoes, onions, zucchini and cucumbers. There's no broth, so the thick paste mixes with the noodles for an incredibly hearty dish. Jam Bong has the same wheat noodles, but is served with a spicy seafood broth that contains squid, mussels, shrimp, peppers, carrots and onions. You can get either of those two dishes separately, but there's also a special called Jjam Jja Myun, which is a circular bowl split into two identical halves, so you can enjoy both soups in one bowl. The last dish that we get here is called Tang Su Yuk, it is breaded and fried pork in a sweet and sour sauce. The sweet and sour sauce is drizzled on after the pork has been fried so it comes out super sticky and packed with flavor. It is typically eaten as an appetizer, followed by the noodle dishes.

We actually get all of our Dduk (rice cakes) that we use at the restaurant from this bakery. Siroo has an incredibly diverse selection of rice cakes (plain, rolled in flour, stuffed with red bean paste, etc.) and all are made on site. Their dduk is the best, especially if you're lucky enough to be there when a fresh batch has just been made. It's super chewy and warm, a perfect snack. They're also known to make Juk really well, a korean rice porridge. It's one of the most straightforward Korean dishes, but very hard to do well.

Outside the entrance of the Annandale H Mart, there's a old Korean man who has a small flat top set up with a table. He's usually out there every weekend, and he cooks Ho Dduk from scratch to order. Ho Dduk is a warm sweet rice flour pancake stuffed with a syrup containing brown sugar, pine nuts, and cinnamon. He'll make a small ball out of some raw dough, stuff it with the syrup filling, and grill them right in front of you while you wait. When you bite into it, you have this delicious crispy crust on the dough followed by the melted syrup inside. Honestly, I think it's the best place to get dessert in Annandale.