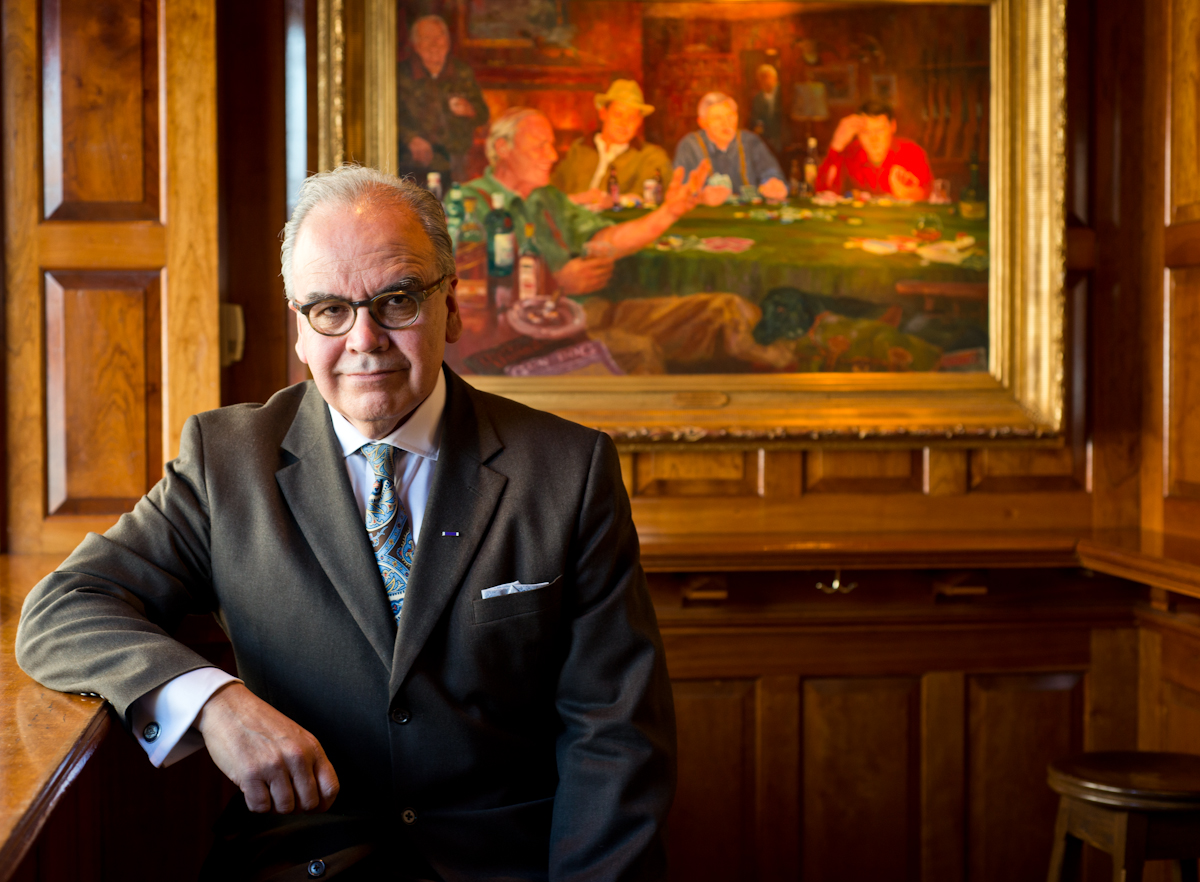 It's no stretch to think of Tony Aleman as the mayor of Old Ebbitt Grill. The longtime maitre'd has waited on more celebrities than he can count, and knows just about every big name in town, from politicians to high-ranking military officials (some with whom he served with himself) to movie stars. Try to take a walk with him from the restaurant's entrance to its back atrium, and the journey won't be a short one. Along the way, he has to calm down a regular whose favorite booth has been given to someone else, chat with about half a dozen customers (two of which have stopped him just to say hi), and deliver instructions to other servers through the earpiece he wears to coordinate the dining room. Aleman looks back on his time running the show at the spacious restaurant, where he began working in January 1992.

Did you always work in the restaurant industry?
I worked for CitiCorp., the credit card company. I was vice president of sales. Back then, they were charging 36, 38 percent interest a year. I was working out of their office in Kensington when they decided to implement an annual fee on top of that — and they didn't tell anyone about it. So [after customers rebelled] they shut down that office.
I was having lunch at the Palm, and a friend of mine was thinking of opening up a few restaurants and asked me to help him do that...I took a job at Bullfeathers and worked there for 10 years.

What was that experience like compared to your current gig?
It was like Old Ebbitt but smaller. We were really the only two restaurants with that kind of dark wood atmosphere. Well, on the Senate side there was The Monocle. But it was interesting to be the maitre'd at a smaller restaurant with a lot of regulars.

So when did you end up at Old Ebbitt?
I got there in [1992]. Around then, a lot of people I knew at the DNC and the White House were regulars. The Secret Service folks came in here often. You get used to the regulars - we'll see what happens with sequestration. When the White House tours are going, you might get 30 or 40 percent of your business from the White House.

How do you remember all the regulars?
I don't remember every name, but I remember faces really well. I have some tricks. Sometimes I'll go to a customer - "Can I have your business card? They need it down in the office..."

How much has Old Ebbitt changed over the time you've worked there?
The volume of customers coming back. Back then we did maybe $9, $12 million a year and were maybe in the 30s on the list [of highest grossing restaurants in the country]. Now, we're more than double that and we're usually around #4...Had John [Laytham, CEO] decided to raise our prices so that we average more like $50 per person, we'd be even higher.

What's a typical day like for you at the restaurant?
I'll come in, set up breakfast. I'll check the reservation list to see if any regulars coming in. I'll find out whether we have any sort of Secret Service detail coming in. Pretty soon, it's time to start getting ready for lunch. Now that we have these [gestures to his earpiece], it's a lot easier. Before that, I had to go back and forth downstairs to talk to different people.

When did you get those?
About six months ago. I really pushed for these. It allows me to be wandering about, talking to regulars...now, we have another host at the podium and I float back and forth and take care of things.

What's the hardest part of your job?
The toughest part for sure, one of our horror stories, is when there are tables that are supposed to be seated together and we have to separate them for one reason or another. Fortunately, celebrities haven't been a tough part of the job. Even if Joe Biden is here, the Press wil stand outside. Sean Penn has come in several times and people don't bother him...They're all generally pretty nice folks. I've never had issues with anyone of them. Except having to deal with allergies and that sort of thing.

How do you handle it when something like that goes wrong?
For obvious reasons I'm the go-to person. If someone is used to having a certain booth, they know to call me. It's the ambiance and little things that make a restaurant like this work.

Is there anyone that has come into the restaurant that you've been really nervous around or impressed with?
No. I don't mean that offhandedly. Linda Carter, she is a great friend of mine. It's always great during the inauguration when everyone comes in. It's jam-packed. This time around, everyone wanted to say hi to Paula Abdul. Steven Spielberg has been here, Barbara Streisand. It's also great to see a diverse set of folks from the military. Sometimes Scott Turner, the presidential pilot comes here. On Wednesdays, there's a big meeting for folks who run Air Force One.

Is inauguration the busiest day for Old Ebbitt?
That and Fourth of July. Being right on 15th street, it's like a tsunami. Twenty minutes go by and it's suddenly packed...The Oyster Riot; it's gotten so popular; we had Anton Scalia judging for a few years. People will try to take advantage and get in.

It sounds like a lot of people have worked at Old Ebbitt for a long time. What keeps you and the others here?
Bobby [Robert McGowan], our chef, has been here more than 30 years. In the kitchen there's a plaque for those who have been here more than 20 years. I think there are 12 of us. It's a company that really takes care of its employees. If an issue comes up for a person, whether it's health or financial, they're always there.

What do you think draws so many regulars to Old Ebbitt?
Folks remember the good atmosphere. Clyde's is a very different place. It varies location to location. We're more on the political side. In 1999 we remodeled the kitchen to be double what it used to be. We added the terrace. Before people didn't want to sit out there. Now people want to because it's quieter. Everyone likes something different.

What's your favorite item on the menu?
I'm allergic to a lot. The kitchen is very good about accommodating my palate, which is very boring. Some boiled chicken, some steamed vegetables. I rarely eat red meat, so I don't visit my friend Tommy over at The Palm much anymore.

What do you do with your time outside the restaurant?
I go to Walter Reed, I'm a volunteer with the Wounded Warriors. I sometimes teach tennis to children. I volunteer for Andrews Air Force base, and bring food to seniors in our neighborhood. There's that new Giant project [Peapod] - that's helped with the seniors a lot.

What do you think about how the restaurant industry in DC has changed over the years?
There's a lot of growth. People at different restaurants are really testing people's palates. You've seen a big rise of new chefs. I read about it in places like The Washingtonian and I learn so much. There's that chef, what's his name? By the White House, husband and wife team.

I did not.
I helped him find his first spot. When it opened we had a party to introduce him to all the regulars.

Do you see yourself retiring?
I love what I do. That's what makes it fun. I like going to work.

Anything else you think is worth mentioning?
We get a lot of comments from folks. I know we work really hard to provide good food and good service. But we're not, what's the name of Johnny Monis' place? We're not Komi. We're not that kind of food. But it all depends on what people like. Some people like the Cheesecake Factory. Not every restaurant can please everybody or do it all. But here, everything really works.
· All Previous Editions of Lifers [-EDC-]
· All Previous Coverage of Old Ebbitt Grill [-EDC-]