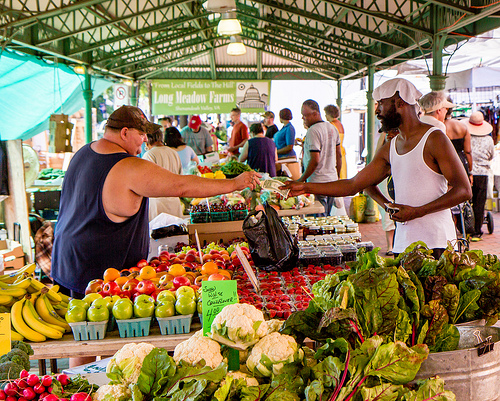 FARMERS MARKETS — The last of the area's Farmers Markets are finally opening back up for 2013. We put together this handy map showing the locations of all of the markets as well as hours of operation knowing that some people absolutely have to live in walking or biking distance.

L'ENFANT PLAZA — That Louvre-esque Pyramid that had been a part of the L'Enfant Plaza architecture was destroyed this week to make room for a new development. Check out the photos of the demolition.

GEORGETOWN — Bob Woodward, one of the Washington Post reporters who broke the Watergate scandal, is about to have a new neighbor. The house next door to his Georgetown estate is on the market. This particular house was built by D.C.'s first mayor, Henry Cooke and asks for just under $5 million.

MT PLEASANT VS ADAMS MORGAN — Vote in our poll wherein we pit two equally priced condos, one in Mt. Pleasant and one in Adams Morgan, against each other for your love and affection. Right now the Adams Morgan condo appears to have the edge.

PENN QUARTER — This current Penn Quarter tenant is awfully absent-minded. They left a note on the bathroom mirror in Sharpie, an apparent reminder to keep good hygiene. Too bad nobody gave them a reminder to erase that note before the realtor came in to snap photos when they listed their place.

ANACOSTIA — This is a Craigslist crazy ad for the books. In addition to asking the future resident of this condo to cook dinner and care for teenagers, applicants need to get a background check and a TB test before moving in. Is this a rental application or an application to work at a hospital?

U STREET — That enormous Louis at 14th development at 14th and U Streets announced that in addition to building an incorporated Trader Joe's, that residents will be able to grill on the rooftop. Best summer cookouts ever?