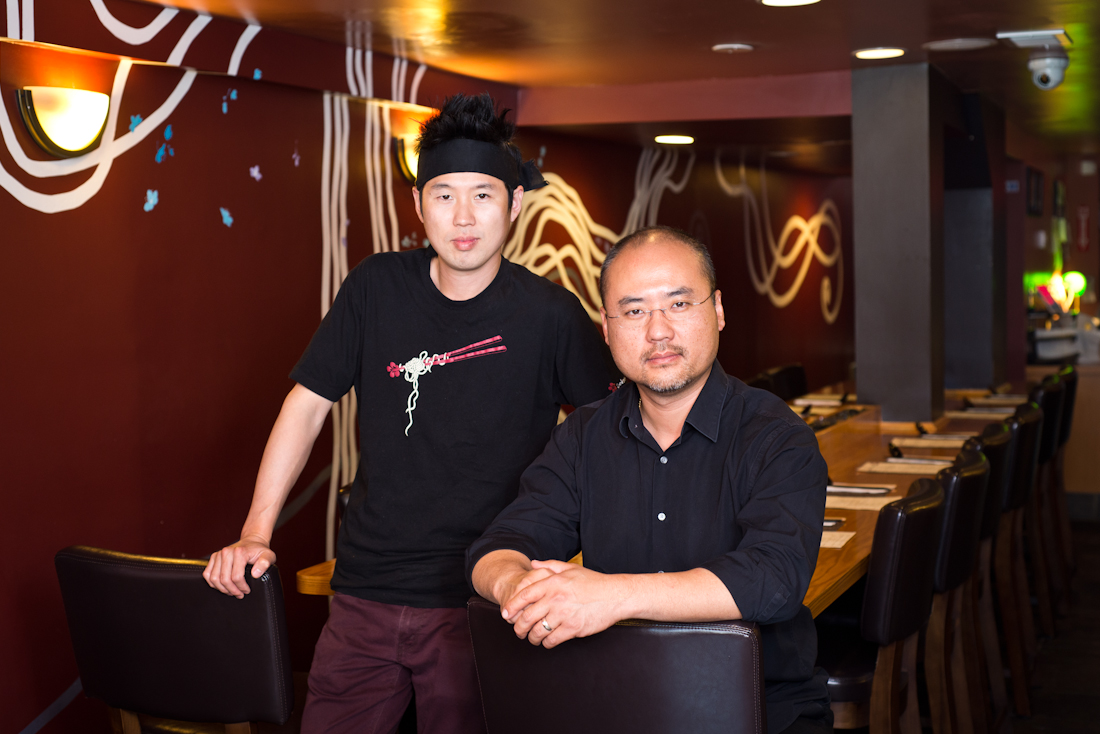 Sakuramen may have ignited a ramen boom in the nation's capital. It may have also helped make the noodle dish trendy. But, at the core, is a family business.

So when the Adams Morgan restaurant opened after Memorial Day last year, it was all hands on deck for the family members of first-time restaurant owners Jonathan Cho and Jay Park. "We literally had our mothers in the kitchen when we opened," said Cho.

Throughout their chat with Eater for Sakuramen's first-year anniversary, the two brothers-in-law praised members of their family. Family was, after all, the primary driver for Cho, who manages the front of the house, and Park, the kitchen manager, to go into business. They said this was just something they wanted to do ever since Cho married Park's sister, Myungeun Park, now the creative mind behind the restaurant's menu. And even with their professional interests--Cho works for the federal government and Park studies Oriental medicine--they still pursued the venture. "It was natural decision for us to go into business together," said Cho. "The way we present our business overall is really a culmination of, not just us two, but the love and support from our family and our very close friends. It really took all of us to make this a reality."

In the past year, that reality has included a dine-and-dash incident, no liquor license, running a restaurant in the ground level of a century-old building, juggling lives as restaurateurs, family men, student and government worker, and, most recently, a dish listed as one of Washington Post's top 40 dishes to try in 2013.

What are your plans to celebrate Sakuramen's first-year?
Jonathan: Probably getting drunk [laughs]. Celebrate with the staff and the success as a team. What will probably happen is that Jay and the two other chefs--my wife and his wife--will probably put their heads together and say, "Alright, the day after Memorial Day is going to be our premier and we're going to do this and just surprise our customers." That morning, we'll post it on our Facebook page and Twitter.
Jay: We're hoping for a special menu.

How do you handle being restaurateurs and working and studying full-time?
Jonathan Cho: [Laughs] It's a delicate balance. Beyond our day-jobs, we've got families. We're both married. We both have children. Jay's parents, my in-laws, are with him. So there are a lot of demands. Yes, I have my day job, but I'm here every night. And Jay, he's able to manage his class schedule so that he's available to make sure the back of the house is prepped. In the beginning, we were always around. Now we've trained our staff. They know what we expect in terms of the quality.

What were some challenges you encountered during the first few months of the opening?
Jonathan: This building! The licensing, the construction. Just learning how to start a business. We have great friends, great family, great mentors. But it's one thing to hear other people tell you what to do. It's another thing to go through it yourself. We had no experience working with general contractors, working with the city.
Jay: As an owner and kitchen manager, it was not easy to find someone who had some ramen restaurant experience. So we had to do everything by ourselves.

I read that you were waiting for your liquor license. You mentioned [in the beginning] that you decided not to serve alcohol. What happened?
Jonathan: At first, we put our names in for consideration to get a liquor license because, you know, ramen-sake, ramen-Sapporo, they come close together. We had to pay a minimum of $40,000 - $50,000 to get licensed. We were confident that if we were going to make that investment, we get that back fairly quickly. What we realized is that even just serving food, people were waiting a half an hour to an hour to eat ramen. As soon as you put a beer or a little bit of sake in front of someone, that 20-30-minute ramen-eating becomes an hour to hour and a half. So [this] become a H-Street-esque type of place--two to three-hour waits. We really don't want that. There are plenty of places to get a drink. So we made a conscious decision shortly after we opened -- "You know what, we don't need a liquor license." Another benefit of not serving liquor is that we automatically become family friendly. A lot of parents bring their little children, babies in here. I don't think that'd be necessarily the case here if we served alcohol. In the weekends, we get a lot of church people and Mormons. We don't even serve coffee.

What's been the most rewarding [part of being a first-time restaurateur]?
Jonathan: It's been watching each other grow. We've learned so much in the past year. Another rewarding thing for me, is watching our staff change over time. They're a young crew. In a lot of ways, we have become mentors, source of advice and support for some different challenges. Everyone comes with his or her stories.
Jay: The chance to introduce some Korean culture and Asian culture. Ramen was originally from China. Many people think it's from Japan. So making ramen, making appetizers with Korean ingredients like the spicy pork, and watching people eat our food, which comes from our own Korean-style recipe.

What's been the craziest thing you've seen? You've mentioned the construction and running a restaurant inside an old building. What else?
Jonathan: It was someone who dined and dash. The first time that happened to us, I was shocked! We got everything on video. They ate a lot of food. It added up to a nice-sized bill. Our staff ran out and tried to find them.
Jay: Last year, it was in the middle of summer. There was a power problem for a few days. It was crazy hot inside. The fan wasn't even working.
Jonathan: The first time we had to deal with a [front] drain issue. That was right before the winter and there was another one right after the winter. It's taken care of now. We had a packed restaurant at eight o'clock at night and then all of the sudden water came up. These are the little things that you never expect to happen. But you have to somehow get over it.

The City Paper highlighted Shoki [pointing to the large painting next to the door]. Why did you chose this character?
Jonathan: One of our close family friends is Jin Chung. He runs an art school in Vienna. Excellent artist. We worked with him and we explained to him what kind of artwork we were seeking. Something original. Something that truly speaks to our Asian heritage, but not necessarily Buddha or a samurai. There's a story that means a lot to us about Shoki. He was a physician in the Tang dynasty. Shoki [is involved with] public health, he wants to serve his people and his king. That really resonated with us. I'm a public servant and Jay's going to be a doctor. Shoki somewhat embodied how see each other.

What are your future plans for Sakuramen?
Jonathan: To innovate on our menu. Make it more seasonal in our approach in our specialty items. The chef already has plans to do that. We want to keep the very familiar, comfortable service style. We do hope to expand at some point. But not year two. Year two is getting closer to perfecting our game.