Share All sharing options for: Lara Logan's House on the Market; More! 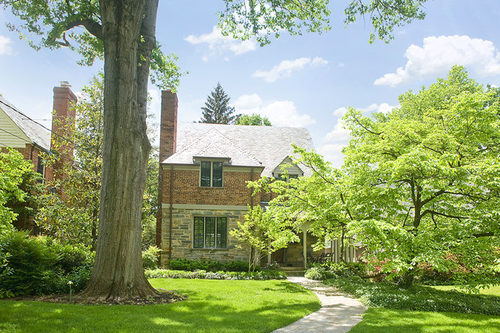 CLEVELAND PARK — 60 Minutes' Lara Logan put her spacious Cleveland Park digs up on the market. Ask is $2.2 million for the journalist's 1935 Tudor, which she bought for $1.5 million in 2008. We also found updated photos highlighting what she had done with the place.

ATLAS DISTRICT — We understand that studios can get pretty cozy and that 371 sq feet is not a lot to work with. However, if your twin bed is located in your kitchen, "Romantic Crash-Pad" is not the description you were looking for. On the bright side, breakfast in bed every day!

BETHESDA — We've come to expect a certain degree of monstrosity from Bethesda homes that hit the market, but this $10 million home has an indoor tennis court and an exercise room larger than some high school weight rooms. Also of note, there is an adorable almost cat-like looking dog in the fifth photo of our gallery.

MT VERNON SQUARE — The expansion project for the historic Morrison-Clark Inn has gotten off to a shaky start what with the collapse of the 1700s carriage house roof, so we figured the folks at the Q&A earlier this week might have some 'splainin to do. Seems that we were right and the neighbors had several concerns.

U STREET — We believe in modern art and murals, but the vacant building entrance covered in gum next to the 9:30 Club? That's just gross. We've been told that the gum wall in Seattle is much worse, but seriously, there are trash cans for this sort of thing.