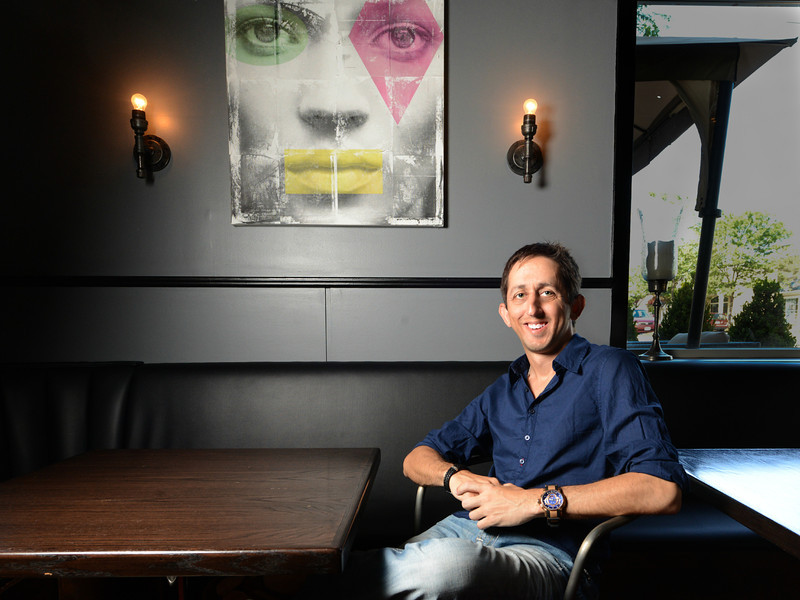 Michael Holstein's Quench had a rough start during its first few months. First, there were the high-profiled changes in management. Then, there was the derecho storm that swept through the D.C.-area, leaving many businesses, like Quench in Rockville, crippled for a few days. He also had to defend Quench's mission to bring the urban lifestyle to the Maryland suburbs. Later, he waged a battle against Yelp.

Despite these kinks, Quench came out on top at this year's Maryland Restaurant Association's awards, winning the Best New Restaurant title. It was also the only D.C.-area nominee. Holstein, a first-time restaurateur, has also been brewing a few restaurant-based reality shows, which seems like a natural course for this entertainment lawyer. The D.C-area native now has plans to expand the Quench brand — a bigger space for the restaurant, grocery products and even a market.

For this One Year In, Holstein shared with Eater the lessons he learned in the past year, juggling different careers as a father of two young children, and other projects in the works.

You've had a very eventful year. Lets start with what's been the best part?
It was definitely winning Best New Restaurant in Maryland. We were really shocked. When [Quench was] nominated, I thought it was a scam. One of those, "Hey, you have been selected to appear in the most-important-people book, but you have to buy this $500 coffee book." When we found out it was real, it was very exciting to see who we were up against. Even being nominated was an honor. Then we engaged our base and fans to vote and get involved. We still didn't think we were going to get a chance. It was exciting to win and to represent the D.C-area in the state of Maryland. It was a fun night and a huge, huge honor.

Worst part?
Everything else. (No, no, I'm kidding.) There was a lot of turmoil off the break. From the immediate staff turn over, that was unexpected, and the second month we opened that derecho storm came through and caused a lot of damage. Getting through the latter parts of the summer months was tough for sure.

What were the main lessons that you learned?
The biggest overarching thing I've learned is how little I knew and how much more I wish I knew when I started. Not that I started [the restaurant] without any knowledge — I've worked in restaurants for awhile. But owning it and maintaining other careers, I underestimated by a long shot how much time it required. So among the lessons I've learned was the amount of hands-on requirement that was placed on me. I think I've become less trusting as a result of this process. I've learned through my mistakes to be a better judge of character. I learned a lot about our area and our demographics...It's really important to serve your community and give [people] what they want.

Why did you want to open a restaurant?
I don't know. [Laughs] I paid my way through law school working at restaurants — bartending mostly. I love the culture and the community. Without the risk of sounding cliche, it was just a childhood dream. It was a bit of a business opportunity and chasing a childhood dream.

You have a reality show project in the works — Design and Dine. How's that going?
I have a couple restaurant-based reality shows in the works. Design and Dine is really cool. It's a Project Runway for restaurants. We've had a bunch of interest from Food Network about it. I'm actually going to be up there speaking to people later this summer. Actually, other networks have contacted us, as well. TV is sometimes a slow and frustrating process, but I feel confident in this show. It's a fun concept. We've had some celebrity chefs be involved as mentors or judges. A very-well done restaurant in New York has offered itself as sort of a prize — the winner will get to makeover the restaurant. The pieces are in place and, hopefully, we can make the deal this summer, this fall with a network.

What was the drive for this reality show project? You're already doing many things. Why add more to the plate?
[Laughs] I don't know. See how much I can handle in a year. No, it was timing. It was an opportunity that presented itself. I'm also doing another show called The Regulars, a bar-based show. We shot a pilot for that. It's been a crazy year. I saw a bunch of opportunities. I didn't want to pass them up.

You're a businessman with a lot of projects and an [entertainment lawyer]. How do you find time to be a family man?
I've been honestly blessed to work with really good people, whether it's the manager at Quench, production partner or partners on the record label. I work with people who I trust and admire. It's them who enable me to be this lunatic pursuing these projects all at once. I manage to come before bedtime four to five nights a week. It's tough, but it doesn't involve a lot of travel so I tend to be around. For sure, that's been one of the hardest part — missing things with the kids.

I read in your bio that one of the things you also want to do is demolish Yelp. How's your quest to end Yelp going?
[Laughs] I despise Yelp. It's one of the biggest shakedowns in the world. We've gotten some bad reviews that are real. They are helpful. But we've gotten some bad reviews that are so false...A friend, an attorney, specializing in class-action [lawsuits], is in the process of reaching out to other restaurateurs to let then know that [Yelp] can't get away with extortion. It's a shaky business model. If you google '"Yelp and lawsuits" they've been sued in a lot of places for the same kind of nonsense. I welcome any review from a critic, blogger or whatever...So we're looking at legal options.

What other projects are in the works other than the reality shows? We had an offer from a developer to move over to a bigger space. We're negotiating now. We've started catering events...We're starting a chefs table in the fall. We're talking with another company to get our products on the shelves at Whole Foods and other places. We've been in negotiations for a little while about opening a Quench market, a suburban version of Union Market. 2013 will be a busier year than 2012.
· All Previous Coverage of Quench [-EDC-]