Live in a Dupont Circle Castle; Rent Next to Woodward

Share All sharing options for: Live in a Dupont Circle Castle; Rent Next to Woodward 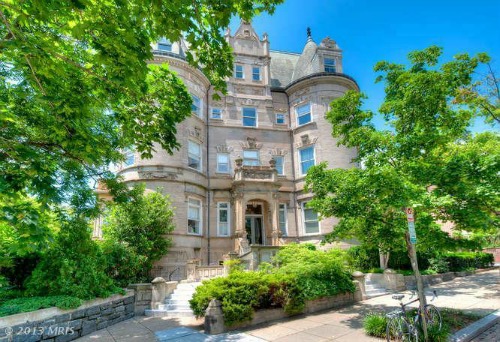 GEORGETOWN — The $5 million home next door to journalism legend Bob Woodward still has not sold, so the owners are also giving folks the option to rent the villa for $16,000 per month.

ANACOSTIA — The National Building Museum's exhibit, Investigating Where We Live: Anacostia, closed on Sunday, but if you missed the cool work that local teenagers did creating a museum exhibit from their observations, we snapped some photos for you.

DUPONT CIRCLE — Some of the row houses kind of resemble castles with their turreted roof, but for $525K you could actually live like neighborhood royalty in this historic castle.

NOMA — A Redditor moving to the neighborhood near Union Station asked their soon-to-be neighbors what they thought of the unusual nickname. They got some funny responses so we also asked our readers' opinions on the name.

ADAMS MORGAN — We tested the Sitegeist app to see what it told us about the surrounding neighborhoods. We took lots of screenshots while sitting in Adams Morgan.

DOWNTOWN VS. WOODLEY PARK — This week's Real Estate Death Match pits two one bedroom condos from different parts of town. Take our poll to see which one is your favorite.

FRANK FUCKING GEHRY — We're starting to doubt this Eisenhower Memorial will ever get completed, especially now that a Congress subcommittee voting (with a full House vote pending) to reopen the design process. We polled our readers as to what will happen first: the Memorial's completion? Hell freezing over? A Smiths reunion?

PETWORTH — More photos for you as we checked in on the construction of the Georgia Avenue Safeway which looks more like a buzzing site now and less like an earthy pit.

OLD TOWN — Some neighbors are awfully jittery about the thought of a hostel coming to their neighborhood. We're wondering if they've ever stopped in at the Hostelling International location in D.C. or whether they've been to any hostel at all.